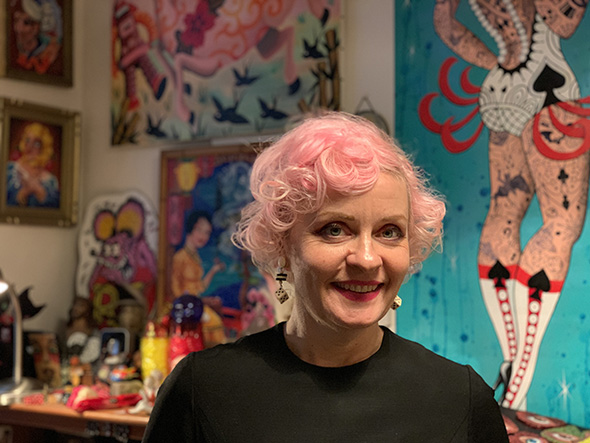 Sunny Buick in her studio in Paris, France

Sunny Buick likes to play around with lots of different materials. Her process is a joyful one where exploration and variety are essential. Whether she is painting, writing, doing performances or making videos, all of her work is informed by her 27 years experience as a tattoo artist. Her main interest in being an artist is that it enables her to create her own reality. For her making art is to weave a rocambolesque tale with strange, colourful characters that come alive and are better able to express and share her hidden ideas, thoughts, fears and desires. Hopefully these stories will help us to figure out who we are, where we came from and where we are going.

Sunny Buick was born in the back woods of British Columbia, Canada and later cut her teeth in the untamed California Art scene. In 1986 while attending a high school especially for artists she started to hang out in the milieu of San Francisco tattooing. She began to apply pictures to the skin professionally in 1992. She served a formal apprenticeship with Henry Goldfield for 6 1/2 years. In 2003, just before moving to Paris, France Buick organized a gigantic art show and catalog called SCI Fi Western, with over 100 artists, which won an award with the Bay Guardian magazine, and was the subject of a Juxtapoz magazine cover article.

Buick has shown in galleries in many parts of the world and in some museum including: Yerba Buena Center for the Arts, and Intersection for the Arts, San Francisco, Foster Museum, Wisconsin, and MIAM-Musée des arts modeste, Sete, France.