Learning to Dance with the Maneaters 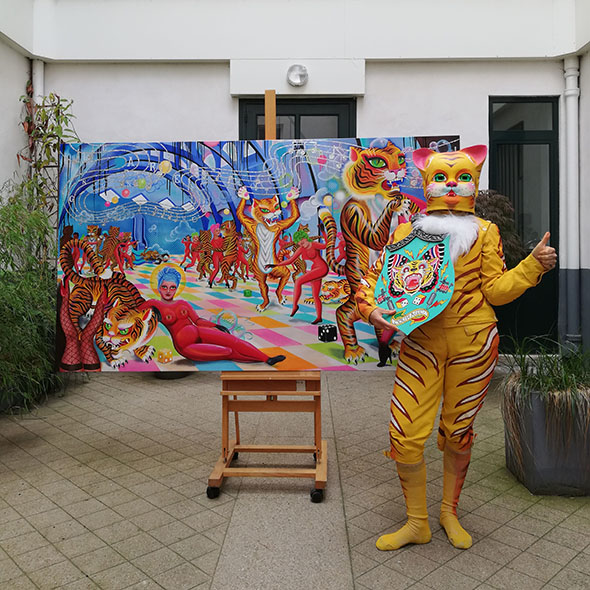 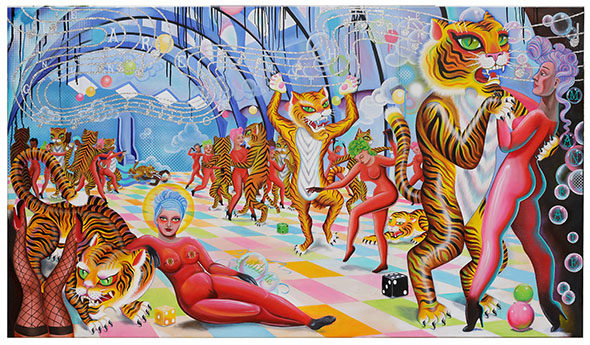 Learning to dance with the man eaters

This painting has a literary reference, when reading Angela Carter’s: “Nights at the circus”, a striking visualization came to me. There is a passage where Mignon, a minor character sings with the Princess of Abyssinia and learns that she can hypnotise the tigers with her voice and then eventually develops the courage to dance with them. The force and the strength of the tiger in contrast to the semi-nudity of the women in the painting suggests the disproportion, the enormous gap, in the fight against sexism and oppression. This discord, the extent of the unfairness shows how hard the combat will be. I like the absurdity of the idea of such an impossible feat (taming a tiger), breaking its natural impulse, too dangerous; simply stupid or naive, tempting such peril. First of all the tiger is armed with superior weight, claws, and fangs! Plus femininity values frailty, beauty, and fragility; but what good do those attributes do you on the battlefield? And navagating sexual politics in this society is like going to war. Women’s keys to breaking down traditional roles of passivity and aggression are fearlessness, trust, and patience, reversing the roles of predator and prey. We learn roles, we learn our places in society. Are we just animals that have been tamed and trained ? The Marquis de Sade said that we are either predator or prey, and that “predators must and will devour their natural prey”. To escape the role of the sacrificial lamb, (to be a piece of meat), his suggestion for women was to adopt the characteristics of the predator; because it is an “eat or be eaten” world. But if we want a better society; this is not the solution! The women in my tableau are learning from the tigers how to stage a revolution, not by copying the patriarchal model or adhering to any dogma. No leaning on established beliefs or religious doctrine; just using their own experience, developing an animal instinct.

A recurring theme in the stories of Angela Carter, is women becoming “increasingly feral and cat-like”. “The lamb must learn to run with the tigers”, she wrote in regards to de Sade and the subject of adopting “tigerhood”. Tired of being tame the tiger woman wants to break free, to dance toward a rhythmic and untamed future. Learning is similar to transformation- to cross the human/animal divide and transcend boundaries, roles and rules. A metamorphosis is already happening, to the women in the painting, their hands and feet are turning black. A pouring out (the dripping paint), and the feet in the air, represent the need to turn our world upside down. Carter says that refusing fear is the solution. Apollinaire says a new woman will renew the world.

Dance is cooperation, one leads, the other follows. In love there is this dynamic as well, strong wills must cede to each other. Bodies in fluid motion suggest an eventuality of evolution. Dance is a celebration where one loses oneself. Is it a dance of death? Medeival popular images of the whole spectrum of society led in a frenzy, dancing until death, these images conveyed a mocking of social position; because we are all equal faced with mortality. I take the idea of the danger of a dance with tigers as another illustration of the dance of death; all these teeth and stripes on the edge of chaos and lunacy.

Why tigers? In Chinese astrology tigers are friendly, brave, competitive, charming and endowed with good luck and authority. With indomitable fortitude and great confidence, people born the year of the tiger can be competent leaders. In Tibetan art they represent: “unconditional confidence, disciplined awareness, kindness, modesty, relaxed yet energized, resting in a gentle state of being that has a natural sense of satisfaction and fulfillment” which I interpret as enlightenment. We are learning to dance from them, and there is so much more that they can teach us.

The throne, the king, the businessman are all symbols of the Patriarchy; the eternal father figure, as angry, controlling, exploiting, the punisher. In Beauty and the Beast it is through love that the beast regains his humanity. It is women, mothers and lovers who can bring out the softer sides of men. In The Sadeian Woman A. Carter uses Sade’s work to expose women to their complicity with stereotypes by questioning the experience of seduction. We all could stand to take some inventory, start to prioritise and then reform.

These women are not the white sacrificial lambs. They are the exact opposite visually, dressed in blood red, form revealing leotards. The theme for Gang of Witches 2019 is Mars, the red planet, a sister planet to earth in that she shows the possibility of a bleak future for Earth, a warning, of what will happen if we don’t take care of the environment. There are only 3,890 tigers that remain in the wild. We are in danger of extinction, just like the maneaters. We apprehend man’s uselessness as we move towards dependence on machines. The depth of space in the picture, the dance of the couples are reminders of planets orbiting around the sun. Mars also represents the God of war and conflict, the battle cry of Gang of Witches this year, “Patriarchy is burning”!

The powerful independent woman who can heal through herbs is accused of being a witch and in all the storybooks the cat is cast as her familiar. They are eternally linked, she is assisted, guided and inspired by her compagnion. It is her double, her alter-ego, sometimes her spy, sometimes her protector. Maybe the women in this painting are witches and the small house cat has grown up into a tiger.

My mode of expression is an illustrative/narative style of painting. For me it is so rich because it can be read on so many different levels. Some of today’s issues can only be explained by a visual language. I’m investigating my world, with each painting. 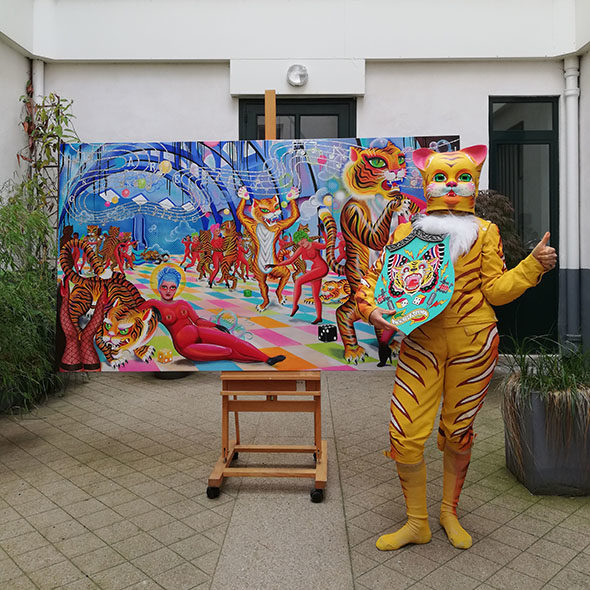 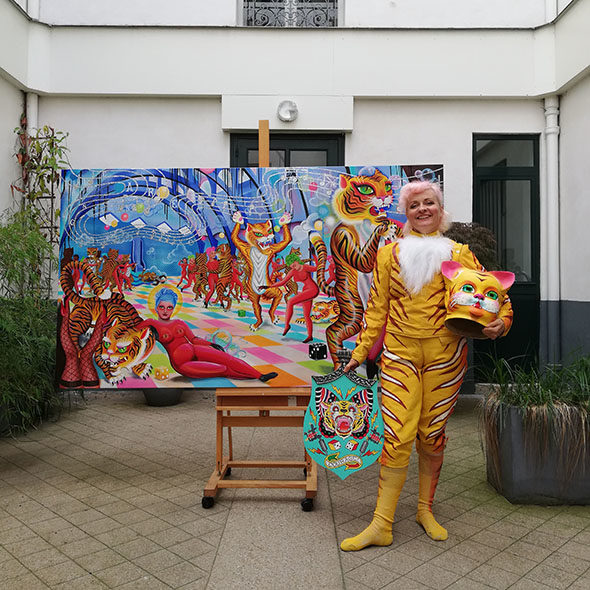 An oil/mixed media painting of a festive scene. In a luminous ballroom, with a multicolored checkered floor, tigers are dancing with women dressed in red leotards. To the left in the foreground, two women are on the floor. We see one of them with just her feet in the air, red shoes and fishnet stockings. The other woman is lounging, leaning on a crouched tiger who seems to be in cahoots or protecting the two women. Near her hand is a group of bubbles around the word « fortitude ». Streams of dancing energy ribbons swirl bringing our eyes to what she has at her fingertips. In the far background against the back wall a ravenous tiger is snacking on a man dressed in a business suit. Most of the tigers are upright on two feet, holding their partner or dancing freestyle. There are clouds of vapor and bubbles that float in the air. We can see glittering music wafting across the image. On the ground are a few spheres and dice. Written in the music we read « L.E.A.R.N.I.N.G. T.O. D.A.N.C.E. W.I.T.H. T.H.E. » and in the bubbles maneaters