Inovation Under the Occupation

Shoes were rationed because of the rubber soles and the capital of fashion responded with wooden soled shoes which you could buy without a coupon. Some fashion magazine illustrations enthusiastically showed the “country girl look” and the link between the heritage of the french clog and the more sleek ’40’s platform version. Innovative fashion designers showed hats fabricated from recycled wood shavings.

There were false bottomed purses for hiding fliers for the resistance. Scarves printed with the map of France to help soldiers keep warm and find their way. A little hankie embroidered with ESPOIR “hope” in red and blue. Other patriotic accessories some obvious and others just bleu, blanc, rouge. Makeup for the legs to give the appearance of stockings.

There were a few items showing propaganda for the other side as well. Mention was made of the young women who went out with German officers in order to have her luxury items. A funny naive drawing showed two German officers being towed in their enormous black car by two work horses, a joke about fuel rationing.

There were patterns available in magazines to make your own hat and bag. Sporty fashions appropriate for bicycle riding had their own fashion shows and newsreels, as riding around in a taxi became impossible with gas rationing.

The military look was a heavy influence during those years. Shoulder pads and sharp clean lines were prevalent in day suits. “La java” a popular musette number was transformed into “La java 1943” with lyrics pertaining to the lack of everything due to French resources being siphoned off by the parasitic German war machine. 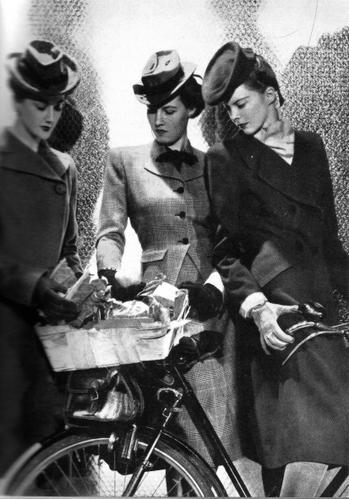 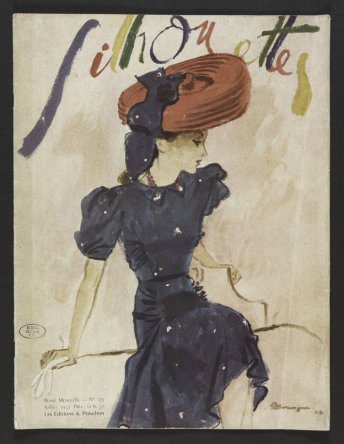 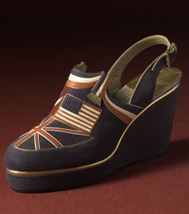 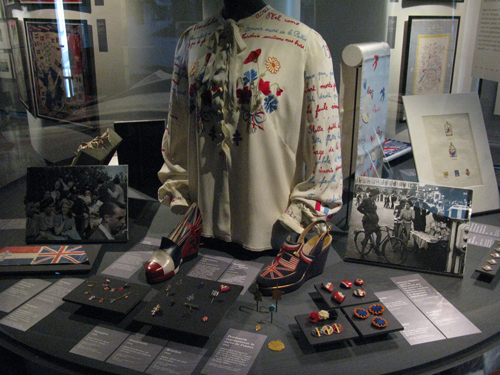