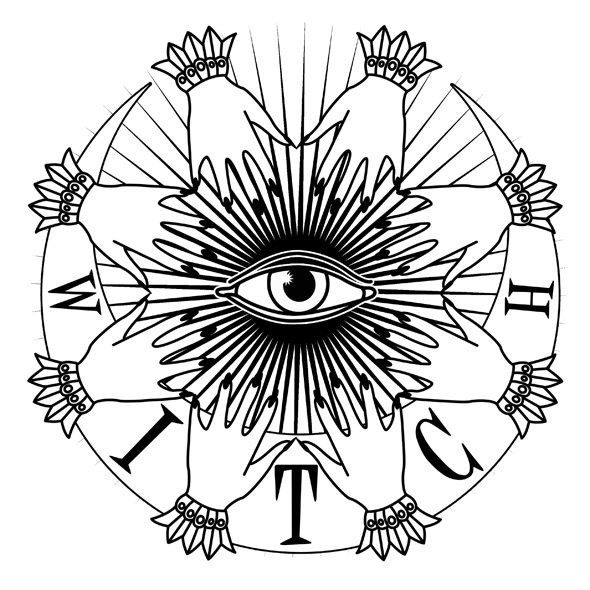 The night of the full moon october 2016 in Paris, the artistic collective W.I.T.C.H. was born. The five founding memebers are Sunny Buick (tattoo artist, painter), Paola Hivelin (artist), Sophie Noël-Saton (musician, writer), LaBaronne O (photographer) and Lina Prokofieff (photographer), citizens of the world, warriors of the light, impossible dreamers. They turn naturally to the architype of the sorceress to baptize their new circle. Independent and powerful, often timid sometimes mocked, always with a halo of mystery, the witch is the master of her identity. Her image marks the place of women in society and of their combats of each era. Since the 1960’s she is a feminist icon, an ecologist, anti-capitalist, and the ideal symbol for the artists of W.I.T.C.H. feminine intitative (yet open to men) and community for a conscious awakening to the ecology is an urgent matter. The collective arises in a context of uniformity of thought, against mass culture empty of sense and oriented only for profit and distraction, a major ecological crisis, maintain a climate of fear of dispair and obscurantism.

Art is a vital necessity for these five women. They are in an insessant quest of their own selves, of meaning, of harmony and of the absolute. All emotions, actions, events constitutes the raw material of their creations. An ordeal becomes an initiation. An intention transforms into a magic formula. A repeated gesture evolves into ritual. A meeting changes into a celebration. Then begins the alchemic work: melanging a glitter powder, some mirroirs and some pigments, tattooing a story under the skin, using of ancestral symbols, producing music of celestial sounds, a symphony of words or taming light through photography. These are their tools of sublimation and the revelation of the invisible, the inexpressible. They give themselves over to a creation organic and spiritual through a mysterious process, between trance and relentless perfectionism, cultivating their paradoxes and welcoming in themselves the opposing forces of existance.

The collective is united by the desire to restore the essential link between art and sacred, the sacred and forces of nature. Their major objective is to establish a protected space for reflection, exchange and creation, a bubble undisturbed by any productive constraints, rich in singular propositions, fertil, powerful, far from stereotypes. The wish to develope automous networks and alternative diffusions, notably through a seasonal revue, Gang of Witches, which has for a mission to promote the collective’s philosophy, as well as artists, researchers and thinkers that are resonating with such.

This gang of “good witches” is situated at the frontier of the material and spiritual sphere, of the visible and invisible, conscious and un conscious, of humor and revolt, of resistance and resiliance. They voyage from one to the other, united and nyctalope, creating points of convergance, opening portals, bringing out the beauty of the world.