Last fall with some kick ass women friends, we decided to start a collective. We wrote a manifesto, which you can read below. We want to pool our resources to promote and encourage each other and we also want to do projects together. Below you can read our manifesto: 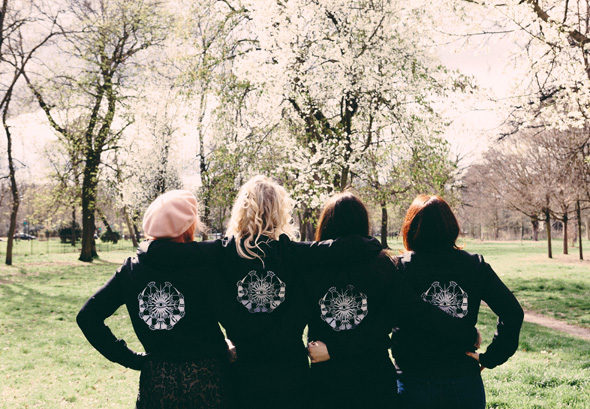 The night of the full moon october 2016 in Paris, the artistic collective W.I.T.C.H. was born. The five founding memebers are Sunny Buick (tattoo artist, painter), Paola Hivelin (artist), Sophie Noël-Saton (musician, writer), LaBaronne O (photographer) and Lina Prokofieff (photographer), citizens of the world, warriors of the light, impossible dreamers. They turn naturally to the architype of the sorceress to baptize their new circle. Independent and powerful, often timid sometimes mocked, always with a halo of mystery, the witch is the master of her identity. Her image marks the place of women in society and of their combats of each era. Since the 1960’s she is a feminist icon, an ecologist, anti-capitalist, and the ideal symbol for the artists of W.I.T.C.H. feminine intitative (yet open to men) and community for a conscious awakening to the ecology is an urgent matter. The collective arises in a context of uniformity of thought, against mass culture empty of sense and oriented only for profit and distraction, a major ecological crisis, maintain a climate of fear of dispair and obscurantism.

Art is a vital necessity for these five women. They are in an insessant quest of their own selves, of meaning, of harmony and of the absolute. All emotions, actions, events constitutes the raw material of their creations. An ordeal becomes an initiation. An intention transforms into a magic formula. A repeated gesture evolves into ritual. A meeting changes into a celebration. Then begins the alchemic work: melanging a glitter powder, some mirroirs and some pigments, tattooing a story under the skin, using of ancestral symbols, producing music of celestial sounds, a symphony of words or taming light through photography. These are their tools of sublimation and the revelation of the invisible, the inexpressible. They give themselves over to a creation organic and spiritual through a mysterious process, between trance and relentless perfectionism, cultivating their paradoxes and welcoming in themselves the opposing forces of existance.

The collective is united by the desire to restore the essential link between art and sacred, the sacred and forces of nature. Their major objective is to establish a protected space for reflection, exchange and creation, a bubble undisturbed by any productive constraints, rich in singular propositions, fertil, powerful, far from stereotypes. The wish to develope automous networks and alternative diffusions, notably through a seasonal revue, Gang of Witches, which has for a mission to promote the collective’s philosophy, as well as artists, researchers and thinkers that are resonating with such.

This gang of “good witches” is situated at the frontier of the material and spiritual sphere, of the visible and invisible, conscious and un conscious, of humor and revolt, of resistance and resiliance. They voyage from one to the other, united and nyctalope, creating points of convergance, opening portals, bringing out the beauty of the world.

Please click to continue and see some photos from opening night: 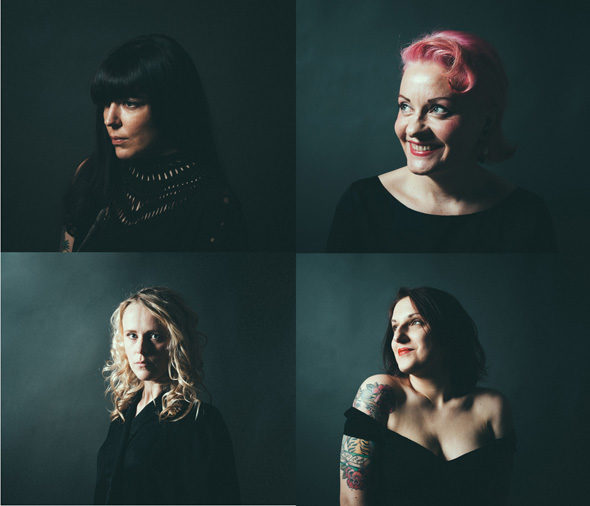 My friend Paola Hivelin was one of the creators and organisers of The Cabaret Organique, you may remember photos of me doing a performance art piece tattooing in a trailer. She is a painter and sculptor. For the show she made a deck of tarot cards from a series of paintings she did inspired by the major arcane of the tarot deck.

Lina Prokofieff is the newest member of our circle, she is a photographer who takes self protraits of private performance art. Her project was a catharthic ritual about possession, heartbreak and transforming pain into strength. She helped us to put together our book and with a lot of the organisation of the event. She is the great grand daughter of the composer, Serge Prokofieff. Needless to say she comes from a very creative family environment.

Sophie Noel is a musician and writer. At the art opening she sang a Baroque concert with the Harpist; Aude Halary. Sophie wrote two books, “Plaintes Contre X” and “Charles Manson Gourou de Rock”. She is in a local Parisian all girl punk band called Madame Ex. For the book she wrote the first installment of a serial novel.

On the night of the opening we had a live dance performance. Part ritual, part magic pure pagan revelery. Two of the dancers in “House of Drama”. 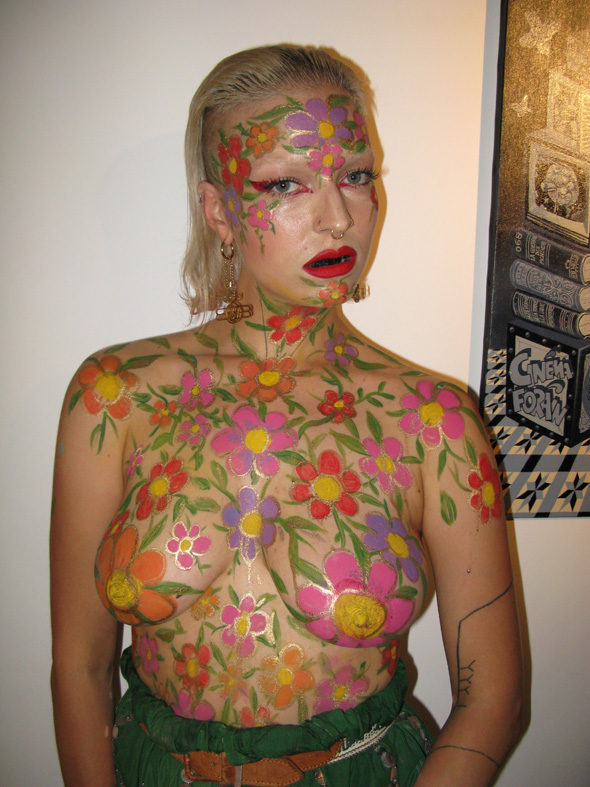 My wolf mask was made by Paola. It symbolises my spirit animal. 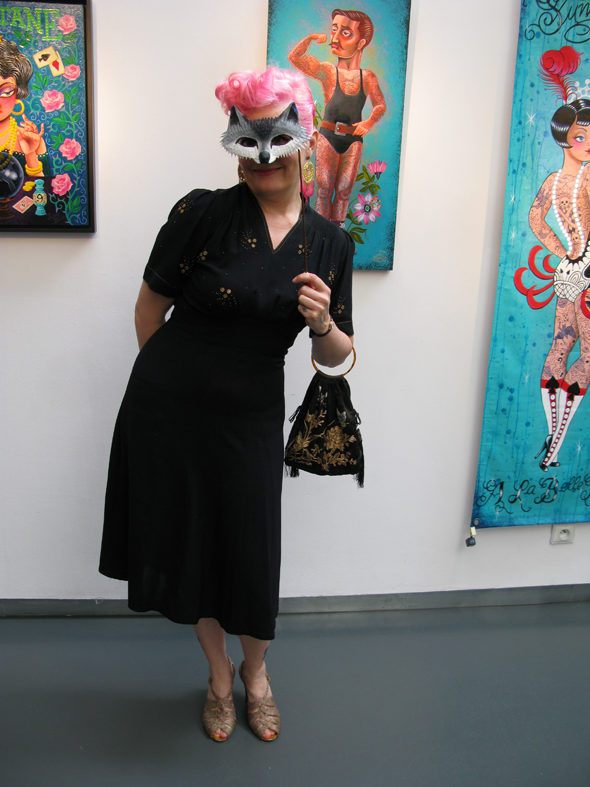 I did a series of paintings and textile sculptures especially for this exposition.

Milagros are mexican embossed tin hearts that are hung in the home or on an altar to ask God for a miracle, or be thankful for one that has been granted. I identify with the miraculous heart, it’s the perfect symbol for what I am feeling, or more precisely a denial of what I am feeling. A desire to feel something else. A self-prescribed form of therapy, after what seemed like a year filled with tragedies.

These hearts have become an obsession, turning my anxiety into a positive and productive activity. Instead of fear and paranoia, I chose to manifest love and miracles. Asking in the spirit of generosity for a never ending supply of ardor in my heart, not to hold onto for myself, but regenerative, expanding, and contagious.

That eternal yearning, searching for intimacy, the “into me see” connection with others. Asking to have more sympathy for others, affection for others. If showing love is the ritual, sharing love is the offering, love becoming a virus is the reward, the magic spell.

I’m calling this kind of work Ritualistic Art. My ritual is to choose a theme and explore it thoroughly.
I work with an intention to understand what is happening on the interior, to create from the center of my emotional being, to objectify the inner states of my soul, to cherish each moment and be present.
I start with a fixed idea and see where it goes, discovering with excitation the unexpected, the unknown. Choosing the detail to pay attention to and then finding it everywhere. Each heart has a different story, illuminates another dark corner, like a candle lit séance.

Creation is divinity manifesting, devotion to the process and the Goddess.

Making art is my way of praying by myself and then finding courage to share with the world. Courage that comes from the heart is my offering. 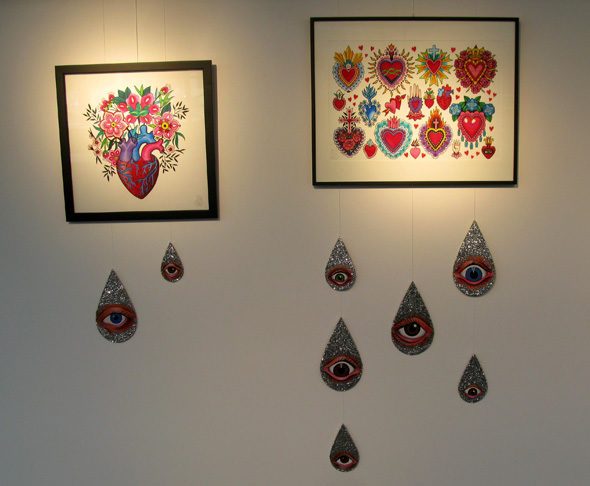 One painting I managed to finish just in time for the show. Fifi and Maurice. 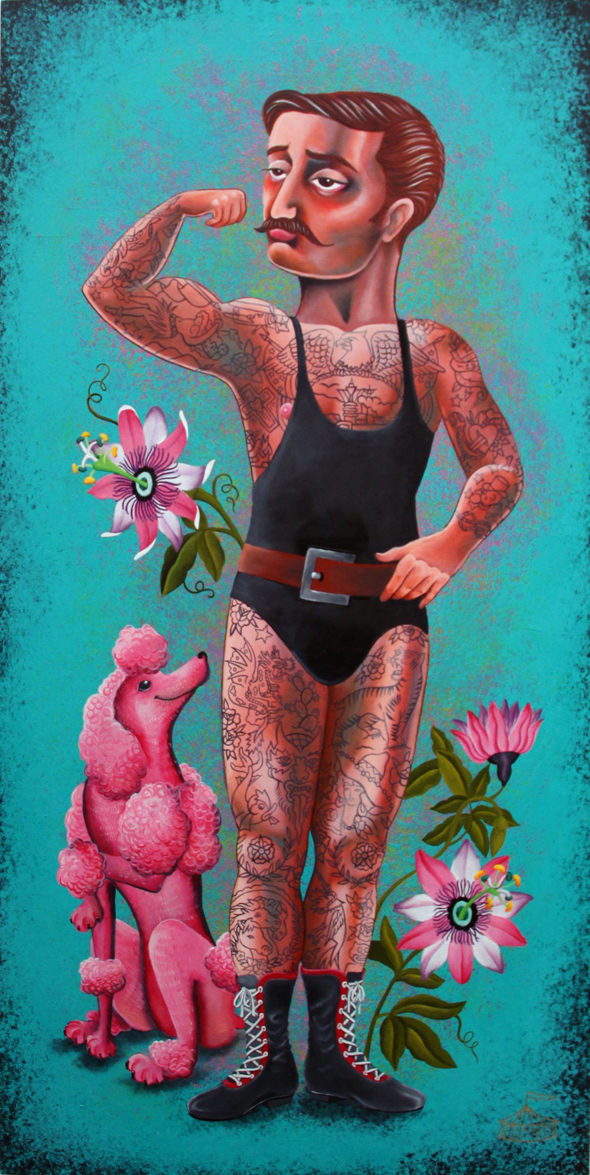 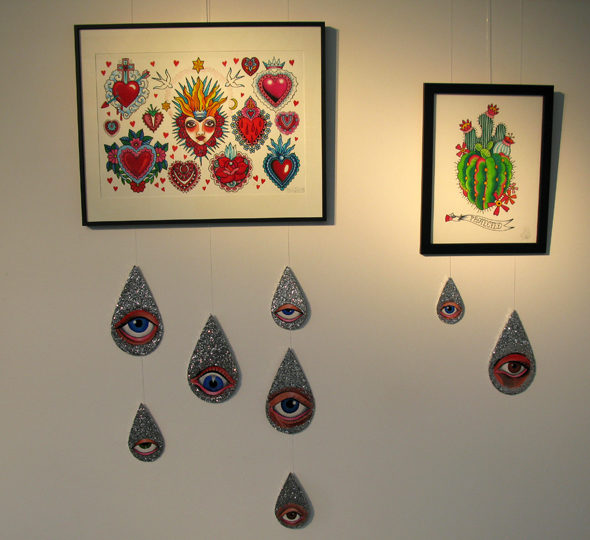 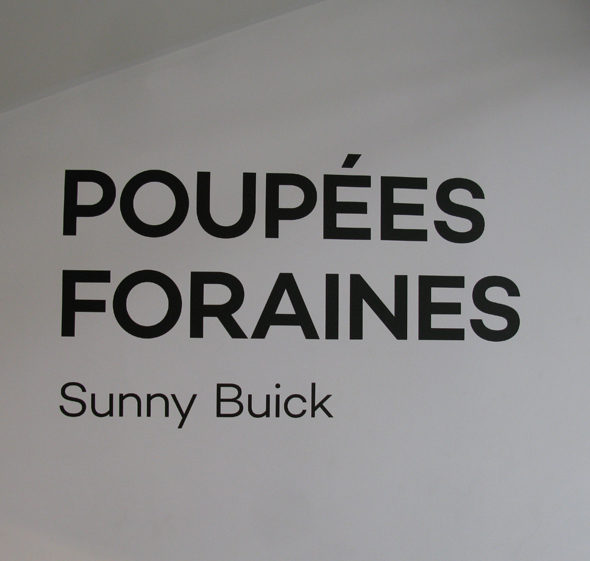 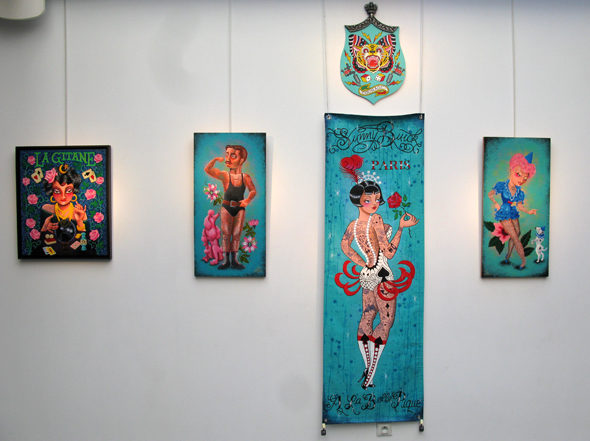 The space is Atelier Basfroi. It was probably a factory of some kind a century ago and has been entirely renovated and redesigned. 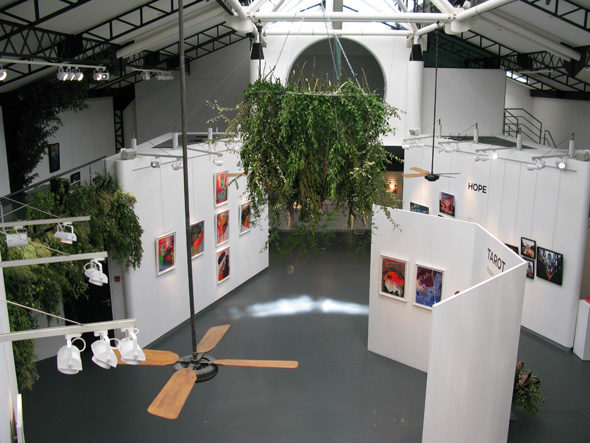 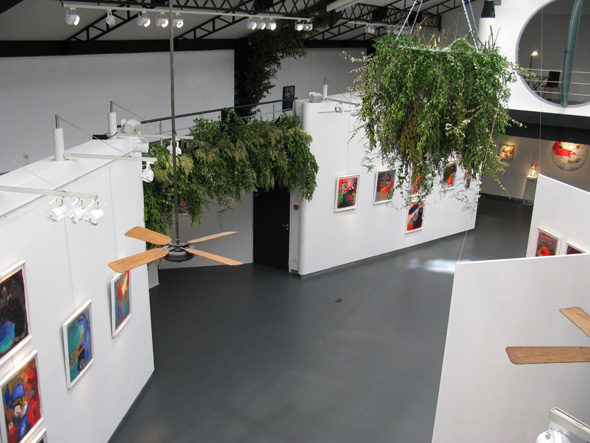 The floral installation was created by Claire Auhustyniak of Minuit Sauvage 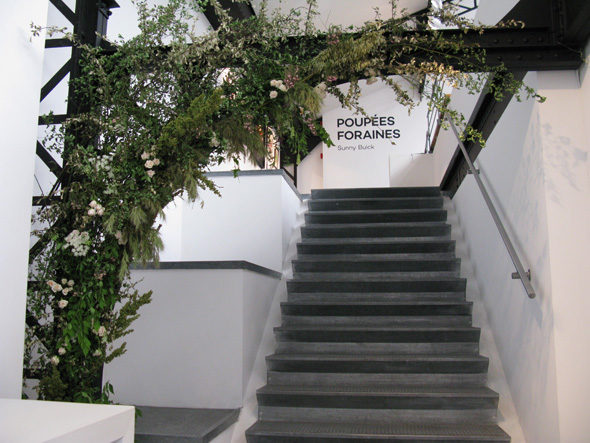 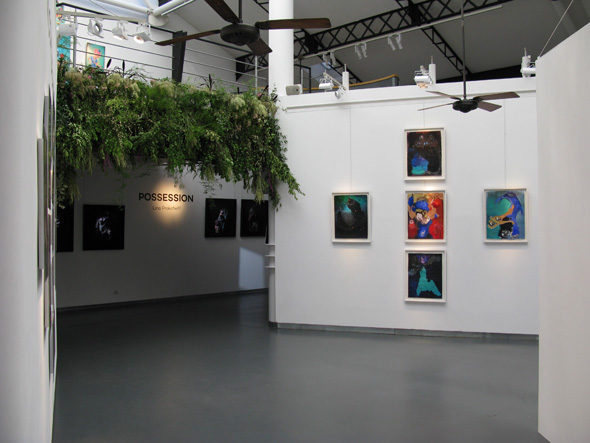 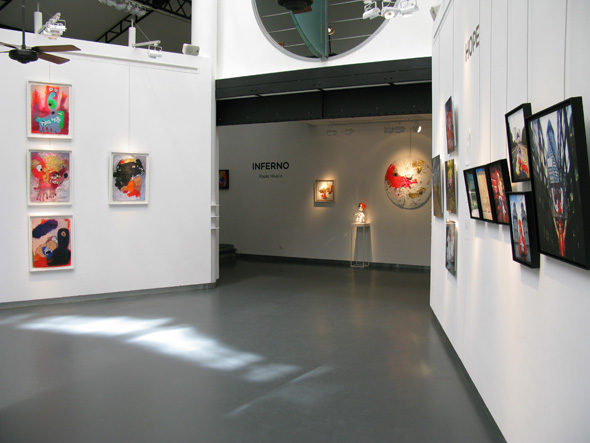 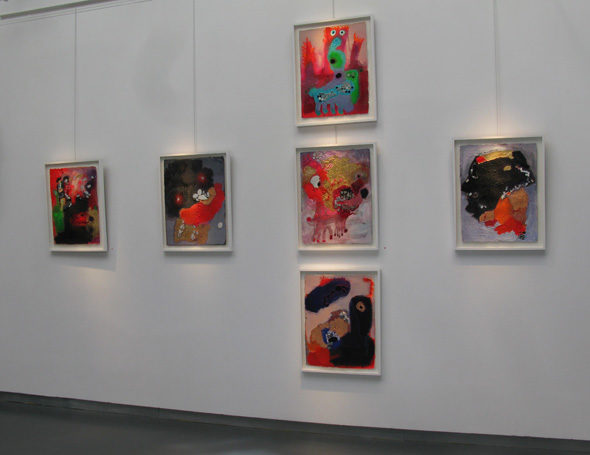 Hope is the name of a collaborative project W.I.T.C.H. made with Lina Prokofieff.

Paris under a ginko tree, Venice the city without cars, Copenhague and it’s wind power, Dijon and solar powered city projects. By taking her works out of their usual context of home, gallery, museum, Paola changes and enforces the message she is trying to express. 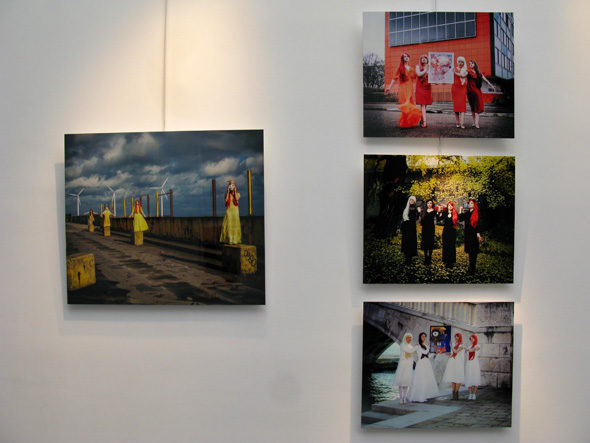 The moon design was made by Gaelle Lagacherie 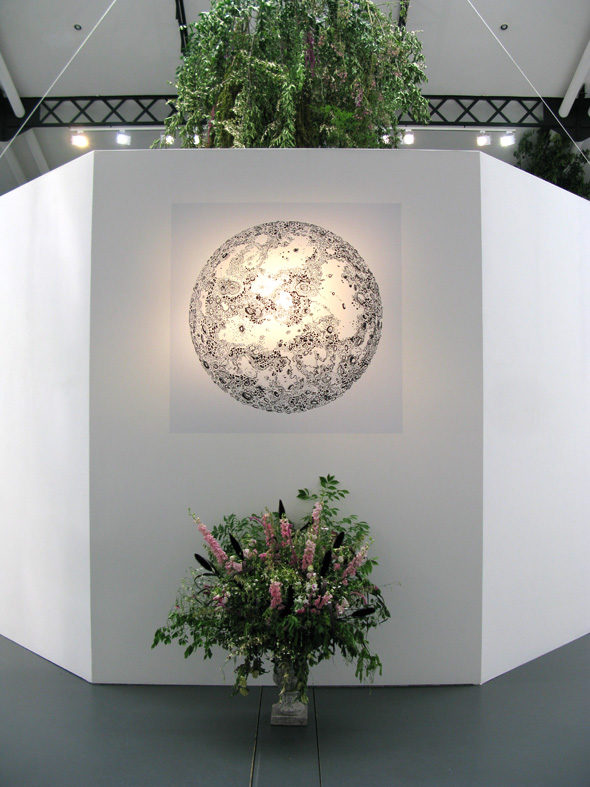 The rest of the photos I took during the shooting of our teaser for the show: 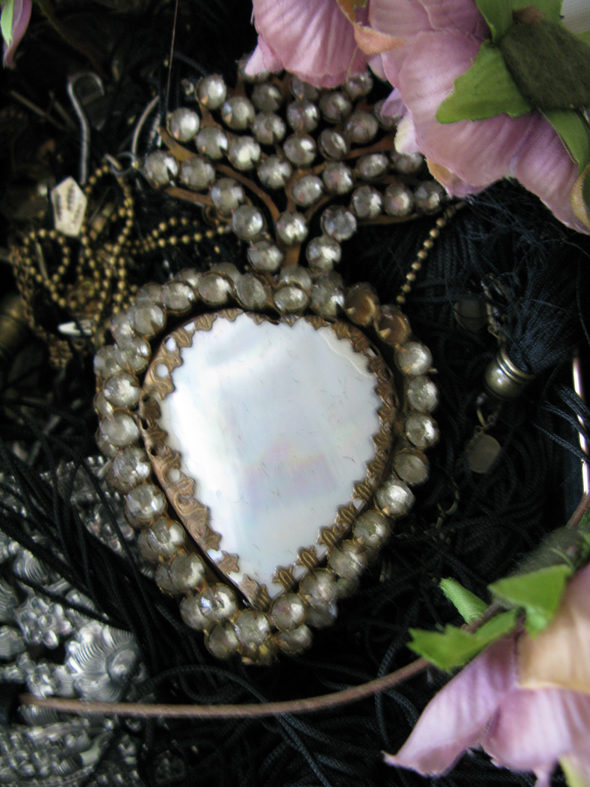 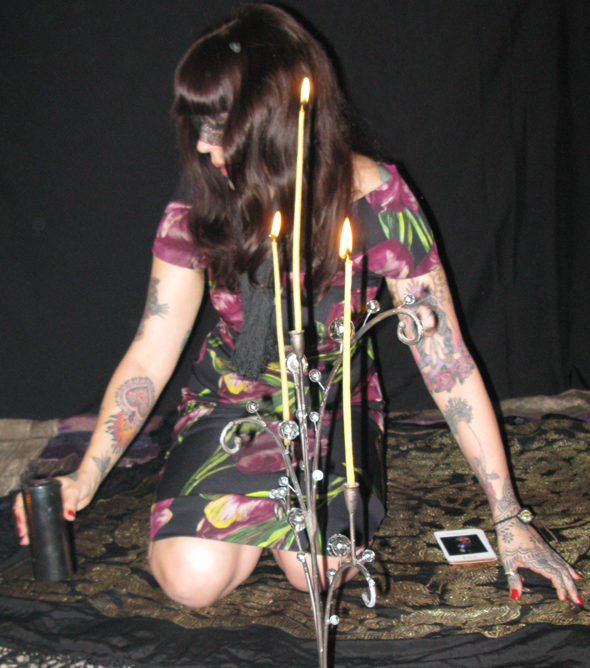 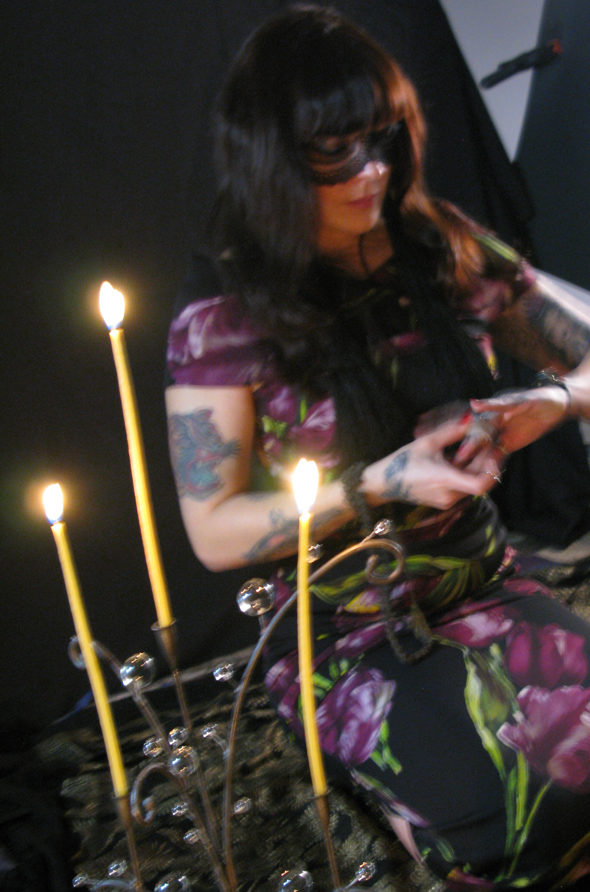 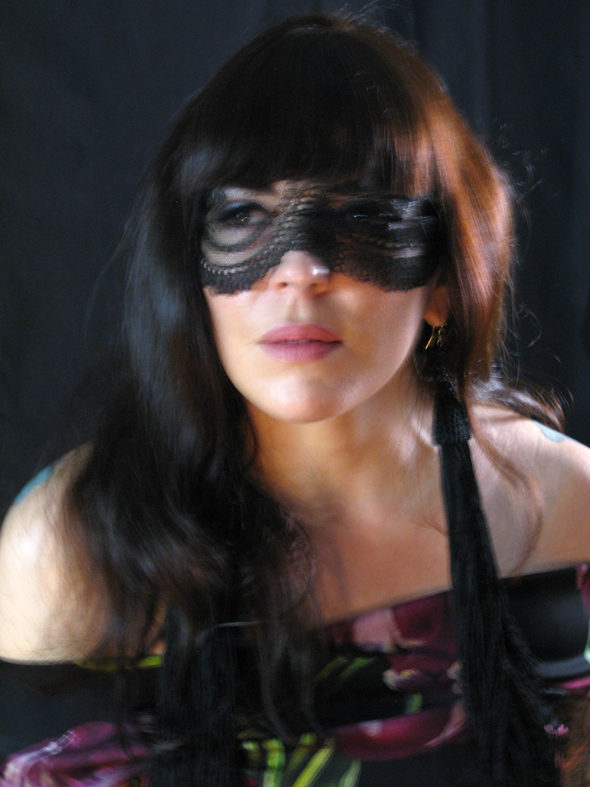 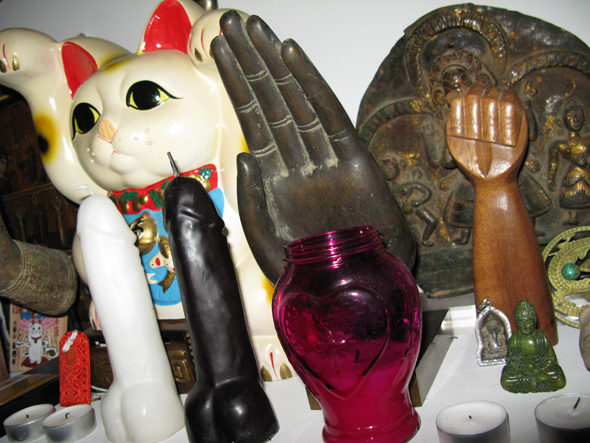 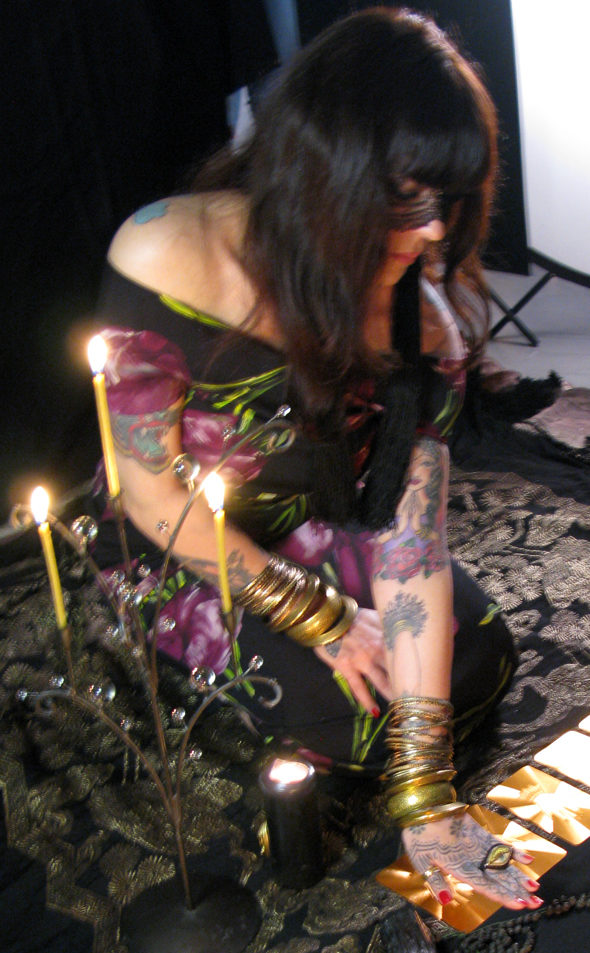 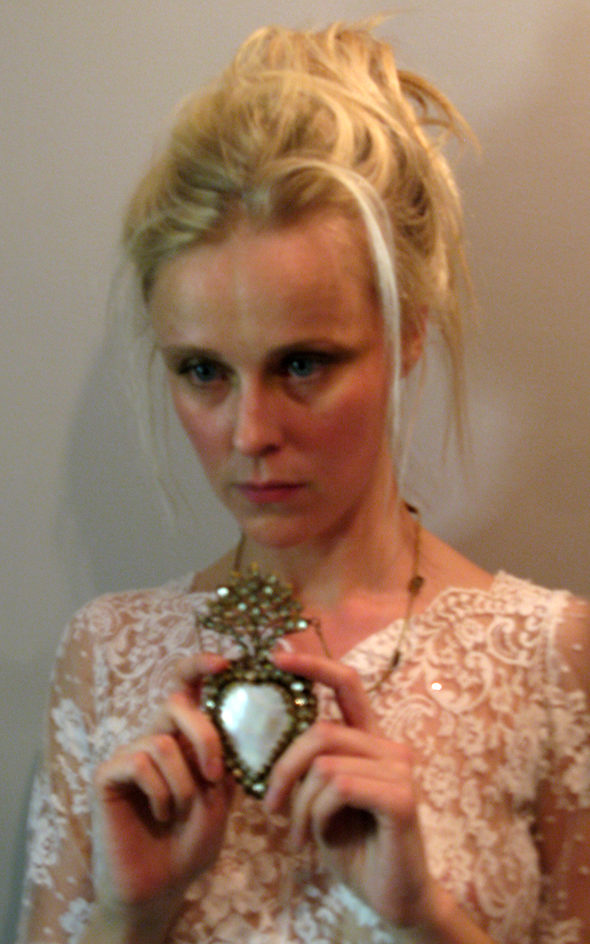 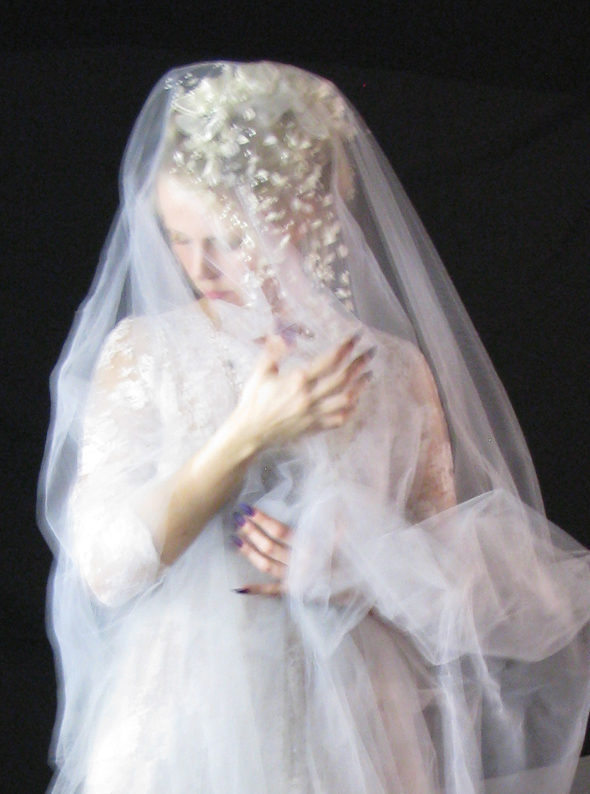 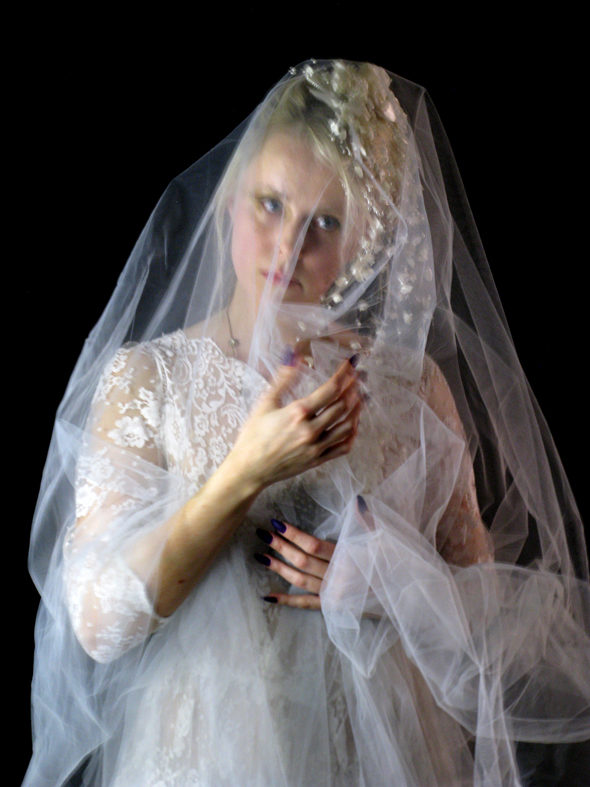 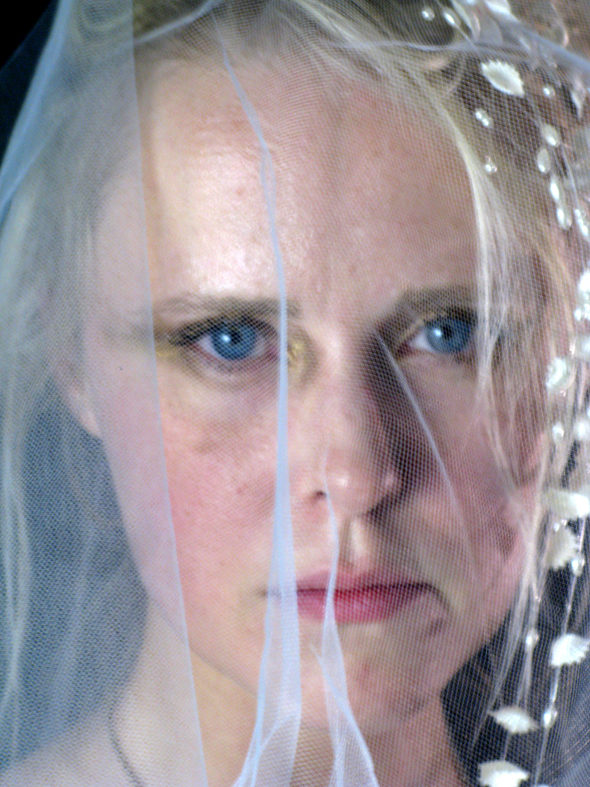 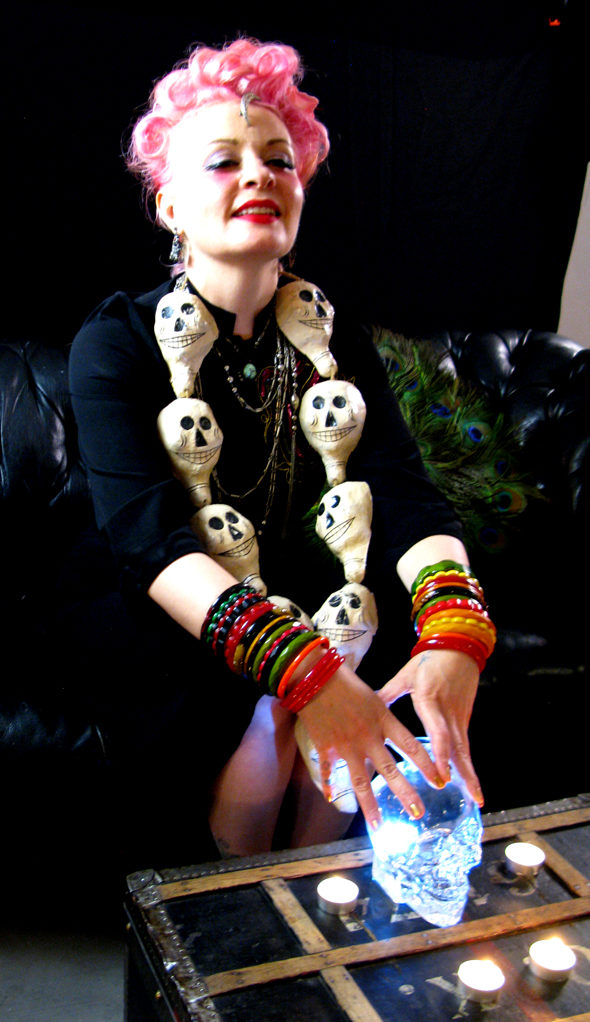