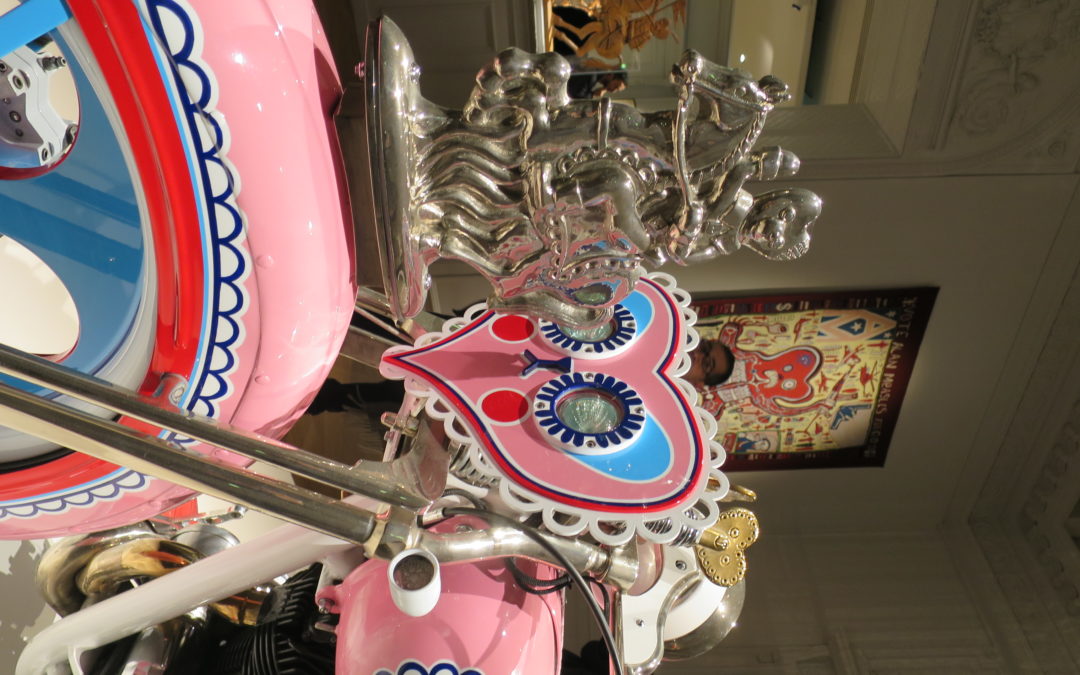 I was so encouraged and hopeful about the art world after seeing two exhibitions in Paris in October/November of 2018. Two artists working in a narrative and figurative genre. Narrative meaning that the image tells a story, and figurative meaning that things in the image are recognizable as real objects. Because for my whole career I’ve always heard dismissive comments about art like mine and artists like me. It’s «illustration» (meaning not fine art), «oh, that’s narrative», or «your work is figurative». As if the message is too obvious it is not good art. This attitude coming from the revolution which was abstract art. Critics said that artists shouldn’t try to manipulate their viewers into anything or try to direct their emotions. Abstract art was adored, in part, because critics could wax poetic for days about concept; rendering almost totally inaccessible for people without an art education.

The unrelenting pursuit for new made the whole art world turn their backs to painting. When photography was introduced painting was declared dead. Why paint a portrait when you can take a photo?  I discovered this later in life, I didn’t have a formal art education. I’m attracted to painting and that’s why I chose to paint. Reading stories was a large part of my formative years. That is why I like the narrative genre. I can understand. For me painting is so personal, an effective way for me to explore myself and express intangible things. 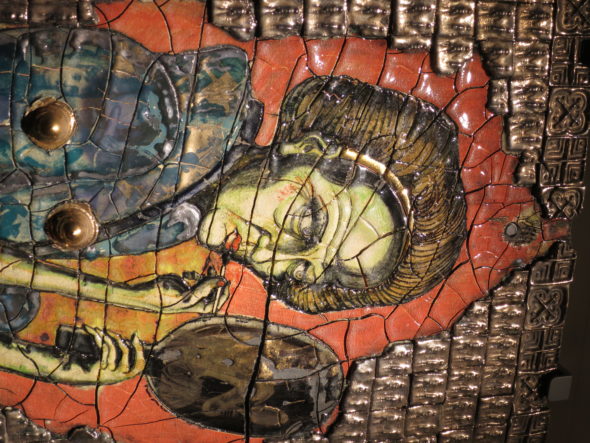 I attended a lecture by the artist, he was of course dressed in drag. He was charming, funny, real and compelling. The audience was made up of quite sexy, fashionable middle aged women.

Perry has been a cross dresser since adolescence. He’s obviously a rebel. He says that in art school people criticized ceramics and “feminine” arts like tapestry, so he said “I want to do that !”. He does social criticism through his art and he uses his art to keep politically active, auctioning his works to help difference causes. Using popular subject matter, often current affairs like Brexit, he tries to create dialogues. He explores sexuality and deviance quite a bit.

The first time I heard and saw the work of Greyson Perry was a year or so before he won the Turner prize (2003). He was putting figures like Henry Darger ‘s Vivienne girls on huge vases. Then I saw photos of him and he was dressed up like one of the Vivienne girls. He definitely can’t be ignored or forgotten.

He often uses his childhood teddy bear “Alan Measles” in saintly imagery as a totem or spiritual guide. It is also a way for him to show and talk about his childhood trauma. (I encourage you to do your own research about this).

Perry is a frequent t.v. personality and art correspondent for the Times. His subjects are art, class mobility and how taste plays into class distinctions in England. I can’t help but think that this is how an artist who can’t follow the rules finds their place in the art world today, by becoming so famous he can’t be snubbed. 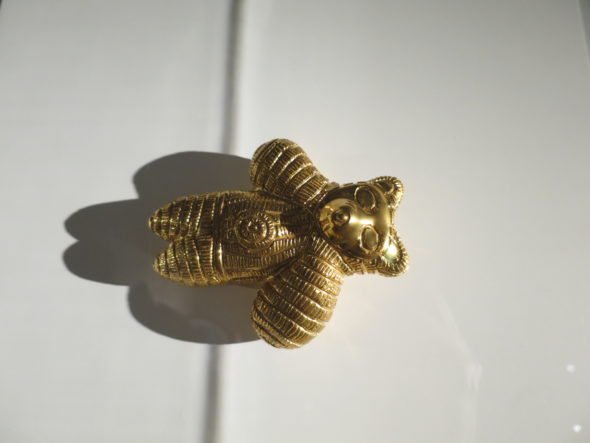 He is a cyclist, and is often seen around town doing his daily exercise. Perry has motorcycle, not just any,  but a Harley Davidson all decked out with lots of pink and crazy do-dads. He is always twisting the idea of virility. 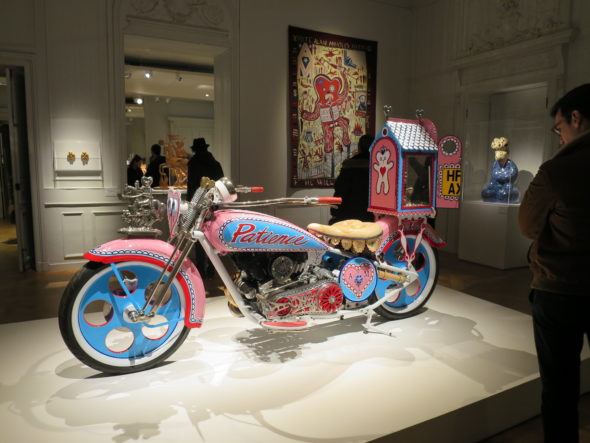 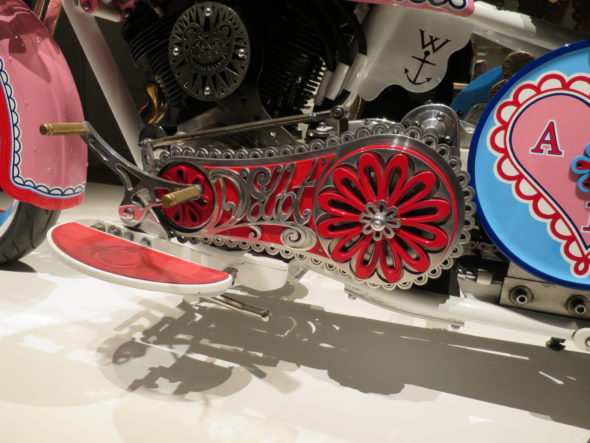 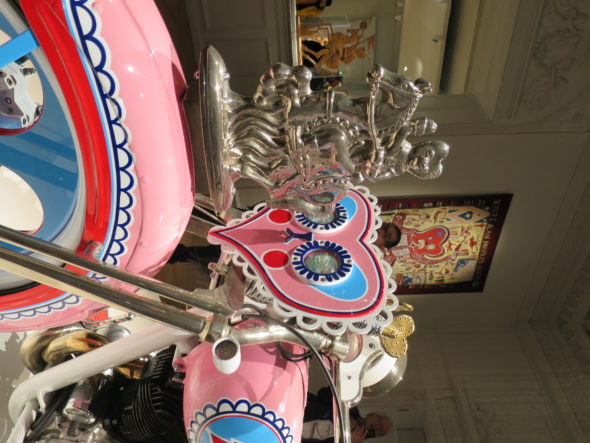 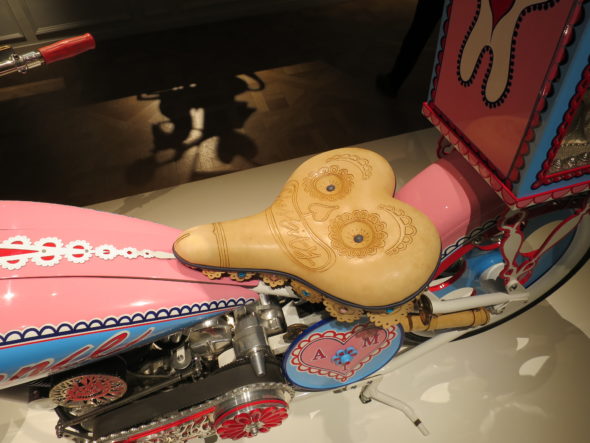 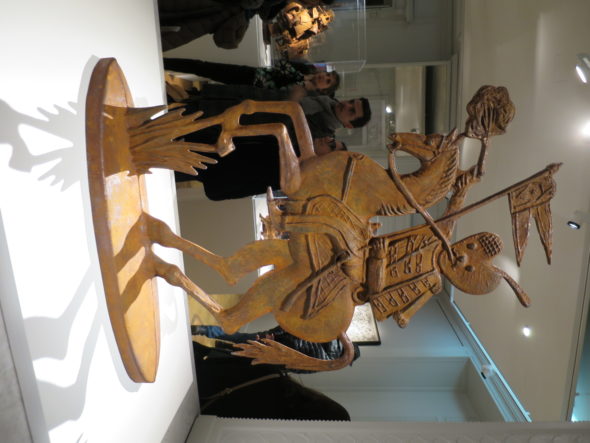 Perry built a sort of shrine or capsule called A house for Essex, everything in the house was designed by him. It looks like a folk art house made by someone with lots of money. Folk art houses are often made by mentally traumatized people who pour all of them selves into expression through shell they live in.

Perry’s alter personality when dressed as a woman is named «Claire». Most of his dresses were created, at his request by fashion students. 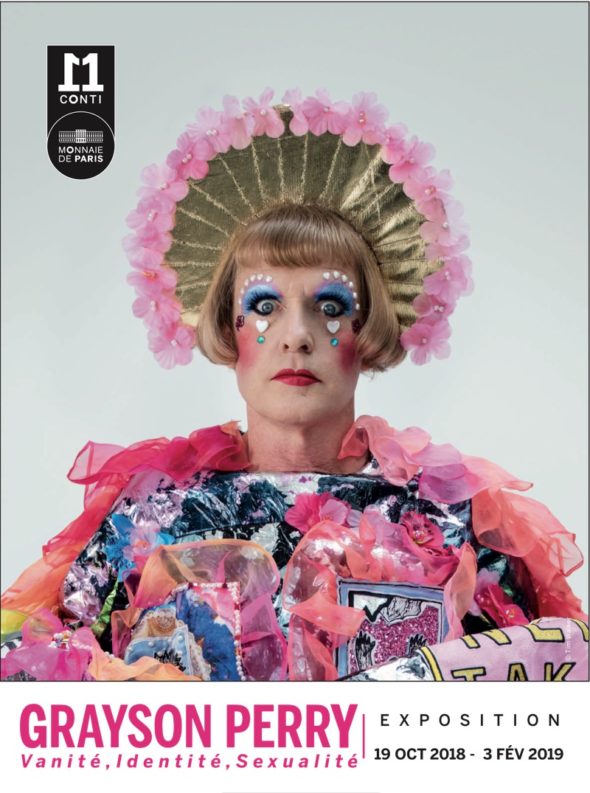 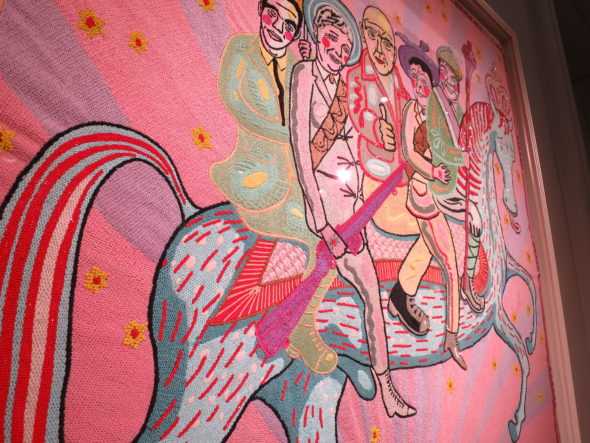 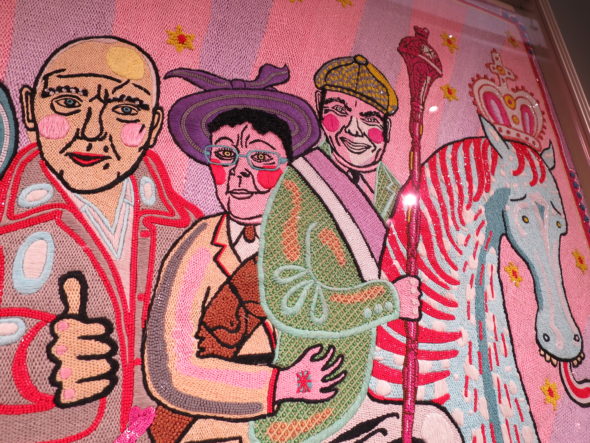 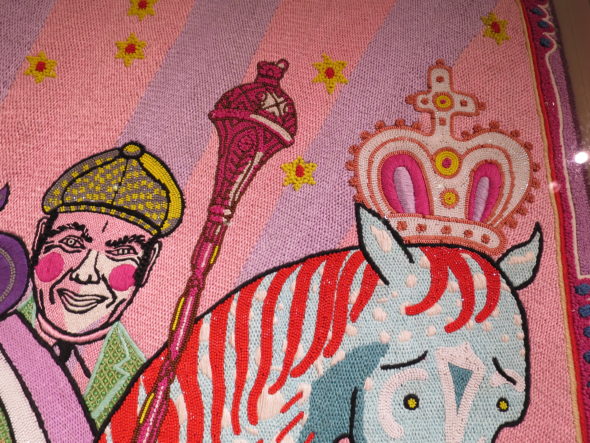 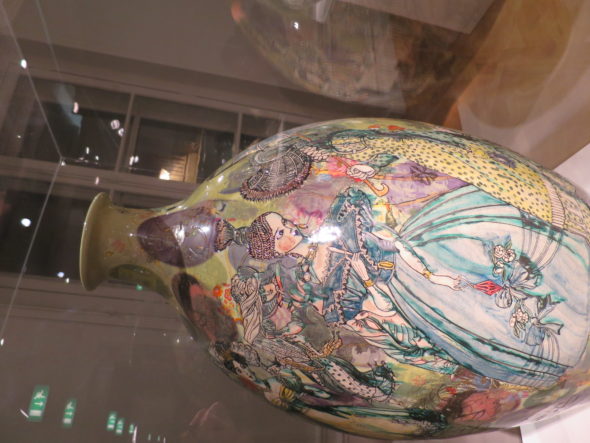 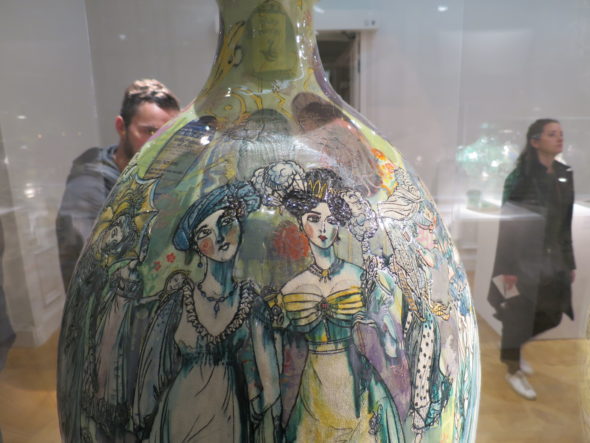 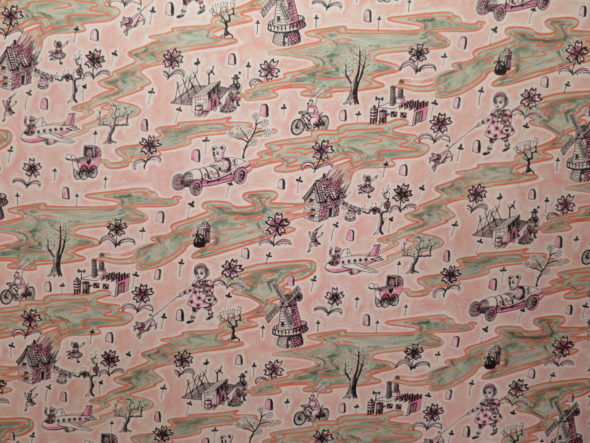 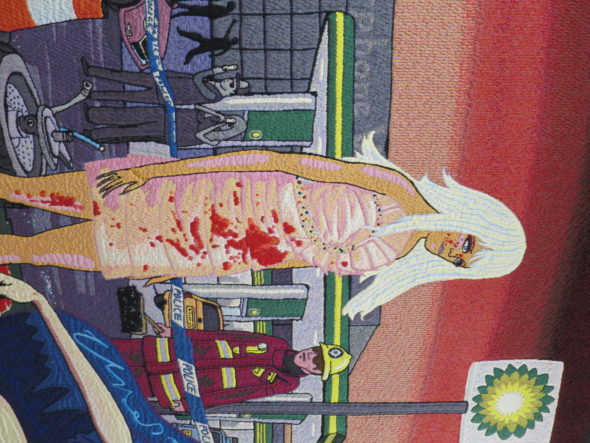 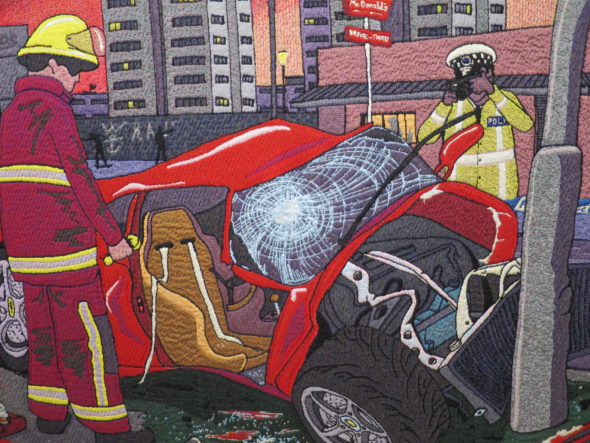 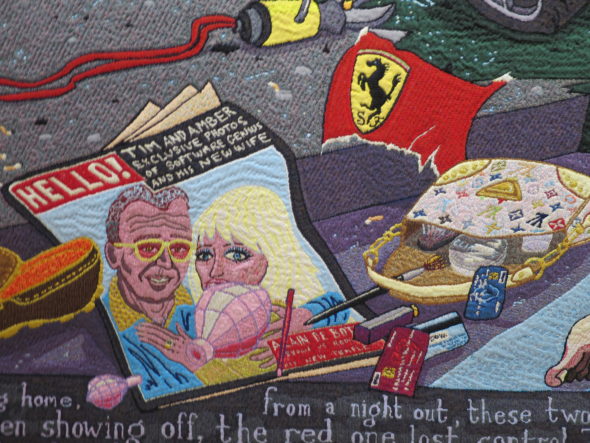 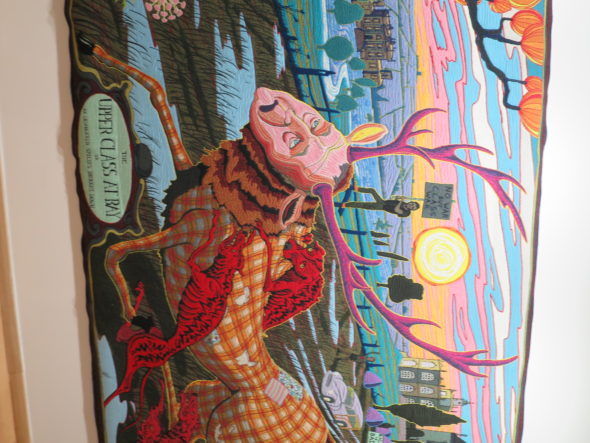 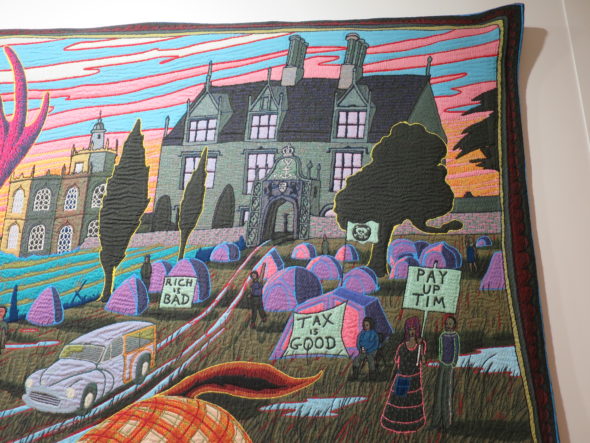 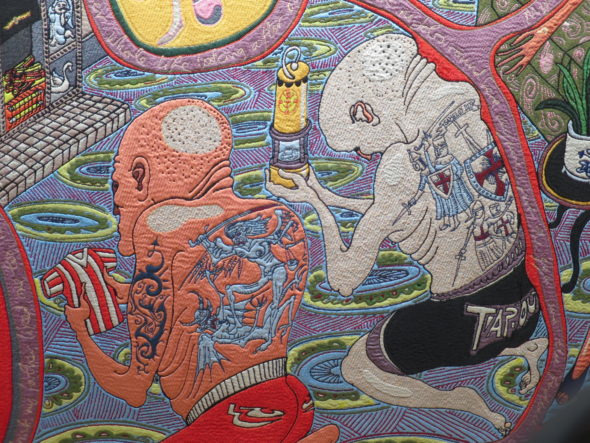 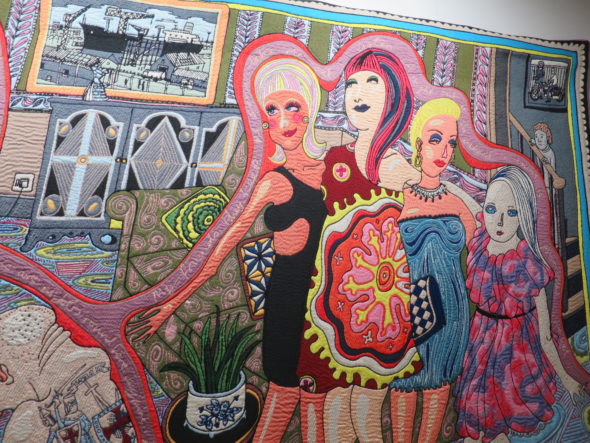 Paula Rego, is a painter that I absolutely adore, who I only discovered a few years ago. A Portuguese artist who has been knighted in Portugal and England and is an officer of the Royal Academy of Arts. Rego has received 7 honorary degrees from different universities, plus she has a museum dedicated to her work in Portugal.

Her work is based on fairy tales, and family life. She sometimes makes life sized «puppets» that she then sets in a scene, using as her models. Much of her work has been focused women’s rights and their right to abortion. After the abortion referendum lost the vote in Portugal in 1998 (it was not granted until 2007), she did a series of paintings about home made abortions. There is also a series of paintings about women acting like dogs, celebrating untamed, feral aspects of females.

Her work is mostly larger format pastels which look like oil paintings, but are probably faster to make and less toxic for the environment. I’m very tempted to try her technique.

I attended 3 conferences for Rego. The first was by Joao Pinharanda an art historian, and cultural counsel for the Portugese Embassy in France, who has known the artist for 30 years. He told her entire story, her background, her struggles and how she ended up finally being recognized. He did a great job of thoroughly introducing Rego, her life and her work.

The second conference was very eye opening. First of all Didier Ottinger the director of MNAM straight up said that figurative art was not at all accepted in France, that there have been very few artists that have achieved any success using such an outdated, old fashioned technique. Choghakate Kazarian, specialist in Henry Darger gave a great talk, showing how outsider artists are the only ones able to create art with real sincerity. Because the outsider artist is totally un-selfconscious (often mentally ill, art is for them a compulsion or means to exercise demons).

Cecile Debray who organized the expo talked about the difficulties in presenting such work but also the timeliness of giving more visibility to women artists. Yves Kobry, art critic also talked, but used a language that was almost incomprehensible, (either that or he said nothing that spoke to me personally).

The last conference was remarkable because I discovered Camille Morineau (from AWARE the website dedicated to the visibility of 20th century women artists). There was Lelia Jarbouai (curator at the d’Orsay museum), Scarlett Reliquet, art historian and Ruth Rosengarten, who wrote Love and Authority in the Work of Paula Rego: Narrating the Family Romance. The audience for these conferences was mostly elderly women. 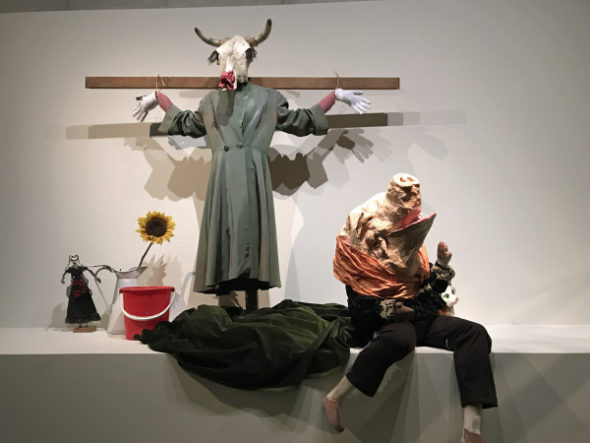 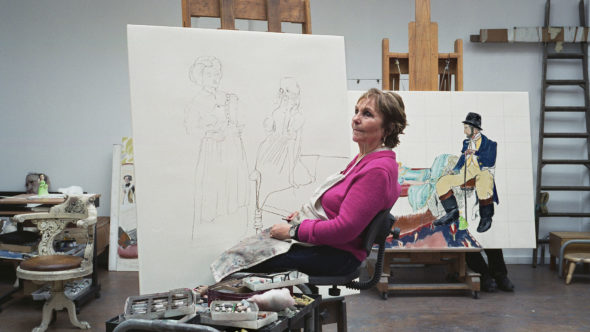 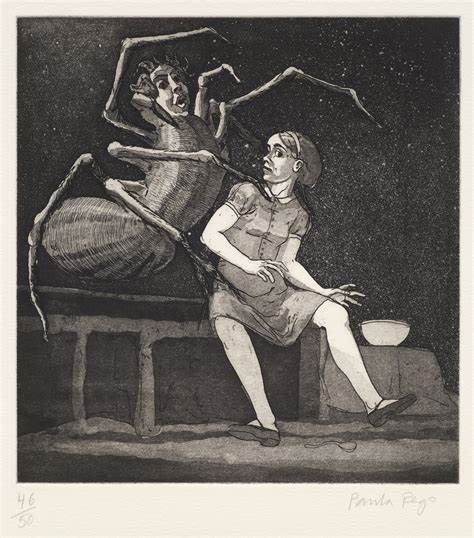 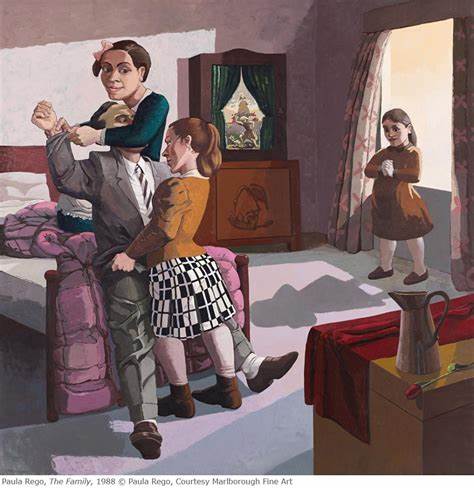 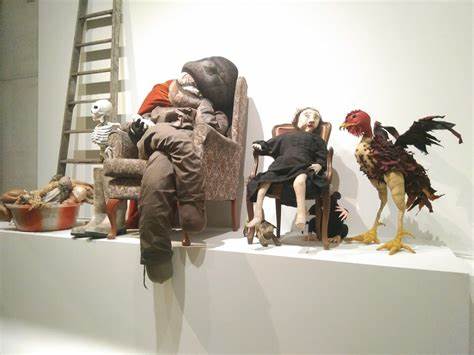 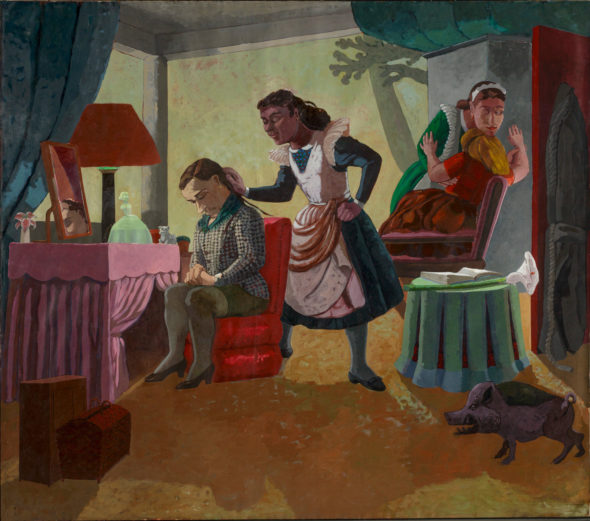 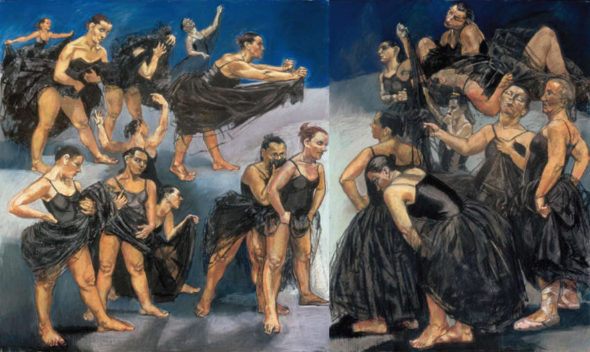 The Artist is in the work

Both artists make work that is intimately connected to their personal stories. They put their traumas in the work in a way which the viewers can also identify. Both show that there are still subjects that only figurative/narrative art can express.

Paula Rego shows violent and shocking subjects, like why we should fight for abortion rights. She likes to invert family power dynamics, to show us the absurdity of the roles we play. Greyson Perry shows that there is an alternative to toxic masculinity. He is heterosexual, yet he really finds all his expression through feminine codes. He is fearless in following his compulsions and in analyzing himself, society and our positions therein.

These two shows leave me optimistic that institutions are capable of changing. Or it could be just a trend, something that interests the public at the moment. If the art institutes can continue to follow this current, to break with the rigid mold and formulas, maybe the rest of society can as well.