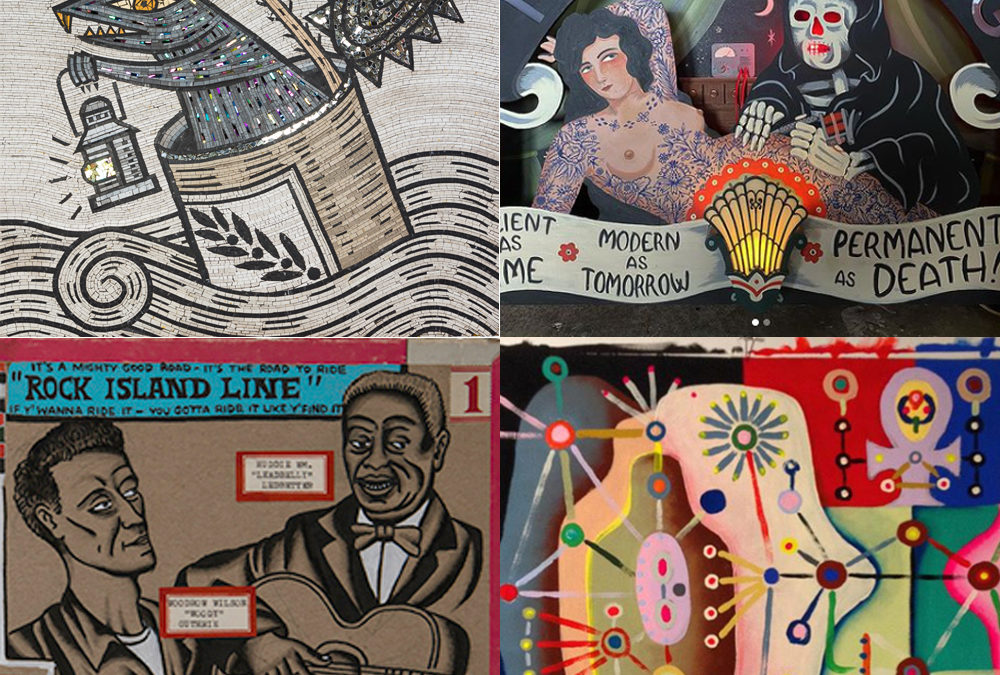 I’ve been talking and writing lately about wanting to make a transformation in my career. For 28 years now, I’ve been making a living as a tattoo artist and a lot of people see me only as that. But I do so much more! I paint, write, make objects, videos, do performances, and I want to eventually create installations and immersive experiences. I want to transform, I want people to see my potential as a multi-disciplinary artist. I want to be showing in museums, public art spaces & site-specific art spaces. Making installations and immersive theater and/or VR. I want to give lectures or participate in conferences at Universities, about the history of tattooing, my journey, and underground art movements. Another ambition is to push myself as far as I possibly can as an artist, to explore deeper waters. Here’s some tattoo artists that I feel are the epitome of what I envision as a person who is a multi-dimensional artist:

Riley likes to provoke and takes risks. He once built a primitive submarine, planned a fake raid on the Queen Mary 2, and got arrested by the coast guard (they thought he was a terrorist). Riley is mostly known for these kinds of performances.

Fly by Night took the art of pigeon training to soar on new artistic heights. He attached tiny LED lights to hundreds of trained pigeons (he belongs to a collective) and set them to fly over Hudson yards as the sun went down. Mixing technology with humans and nature, to create magic through ritual.

Riley’s artwork feels immediately historical, one is reminded of the first 13 colonies, of New England and the naive folk art of the period. Everything fits together, his interest in maritime life, sailors, tattoos, train hopping hobos, New York pass-times like pigeon training, and working class amusements. I wonder what came first? Let’s say tattooing was his original interest. What are all the artistic roots of tattooing? Sailors, travel, myth, performance. Let’s say everything maritime was his original interest. What do sailor’s do as pastimes? Tattoos and scrimshaw (which is basically tattooing whalebone, walrus tusks or ivory). 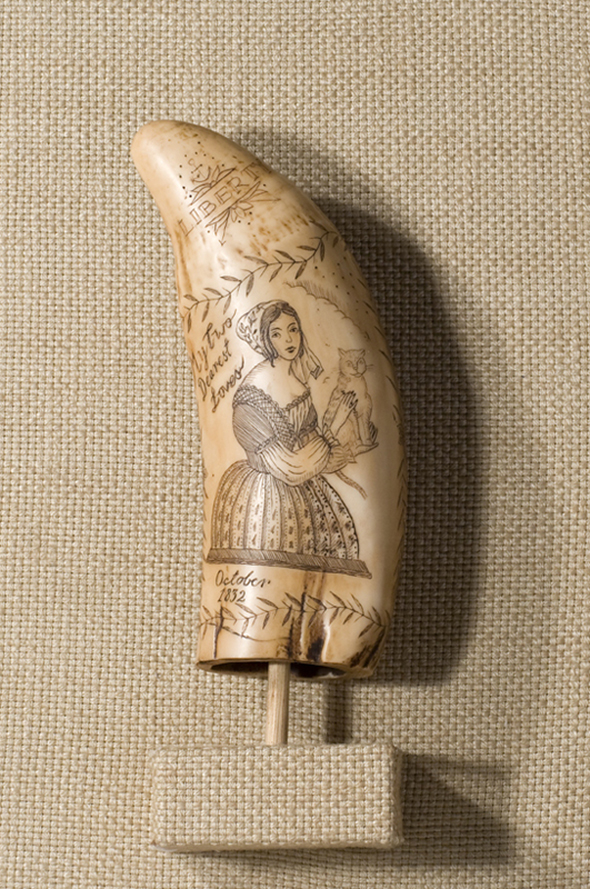 What do New Yorkers do as pastimes? Obsess about rats, pigeons and bedbugs. Pigeon training is both New York and military. How can we show that tattooing is and should be considered a real art? Maybe he has an obsession with the history of the whole business. Maybe Riley started imagining the sailor’s stories, how they fit into the American myth of adventure and exploration. Re-valorizing ancient practices by performing modern rituals. 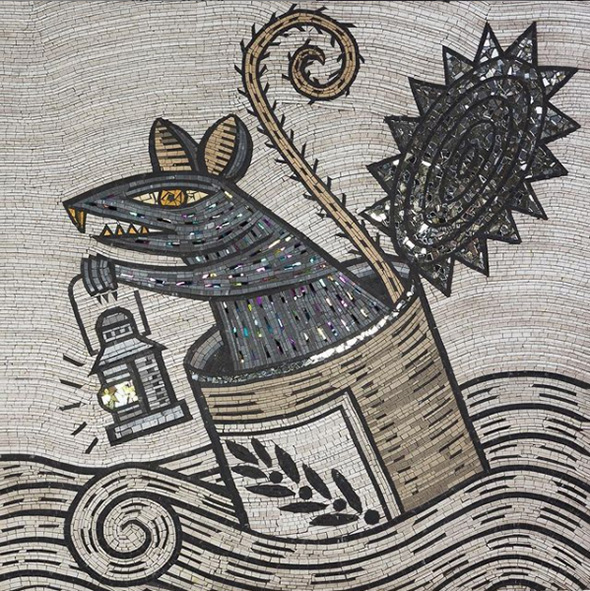 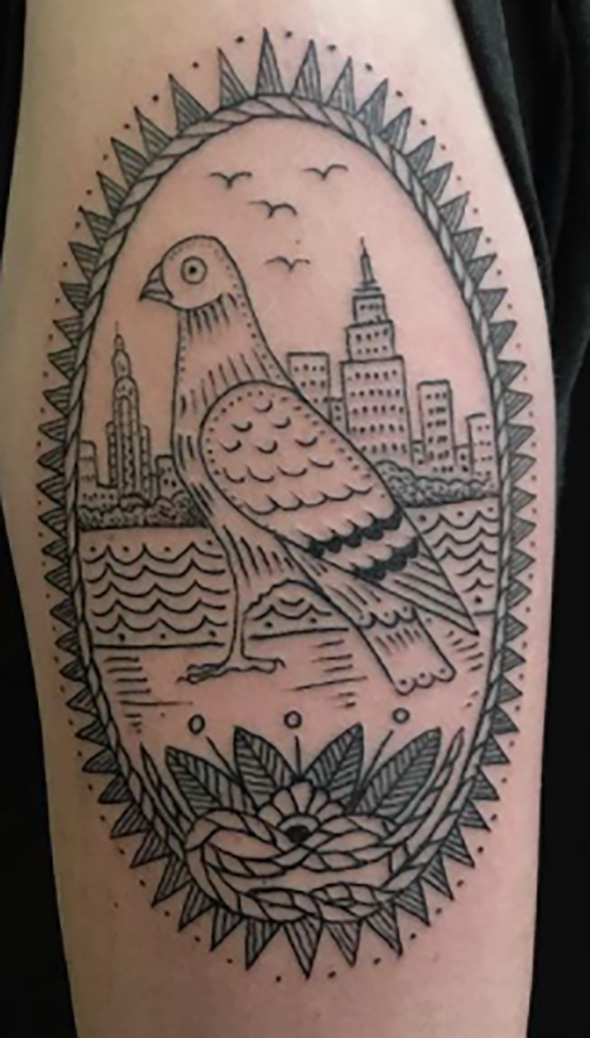 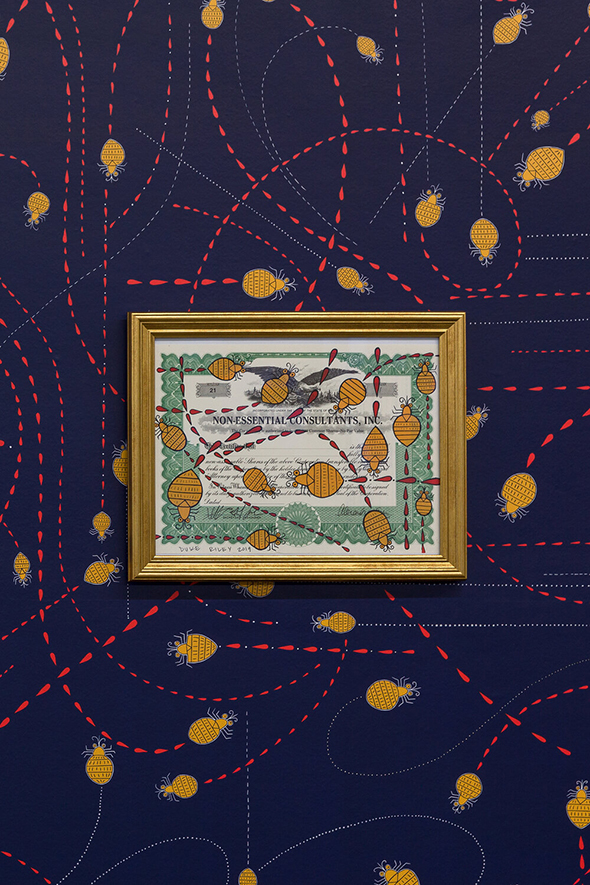 About rats, bedbugs, and pigeons, maybe he’s comparing humans to the creatures he works with. Is it a critique of society? Can you see humans as tenacious parasites, survivors? There is some compassion there, because if we are animals too, we can’t help our nature.

The biggest, most impressive performance he ever created was an orgiastic battle at/in Meadow Lake, Flushing Meadows, Corona Park in New York. It was an approximate reenactment of violent Roman spectator sports. There were also aspects of a maritime battle, but because the lake isn’t very deep, everything seemed theatrical and absurd. But the idea that the performers were acting out their primal human impulses was very clear.

Concern for the Environment

More recently Riley has been working with plastic found washed up in beaches. In the past he has been interested in shell art/shell craft and these new pieces take on new meaning through the lens of our modern environmental problems. He is inspired by tramp art, folk art and traditional Native American Art.

As Riley represents New England, Martz represents the Pacific North West. He also uses nautical themes in his art. With an obsession with tinkering and craft. Inspired by children’s book illustration, sign painting, vintage graphics and logos, his art is populated by sailors, mermaids, sea animals, and port towns.

Installations: He made a giant wooden steamboat/whale for Facebook’s Seattle offices, 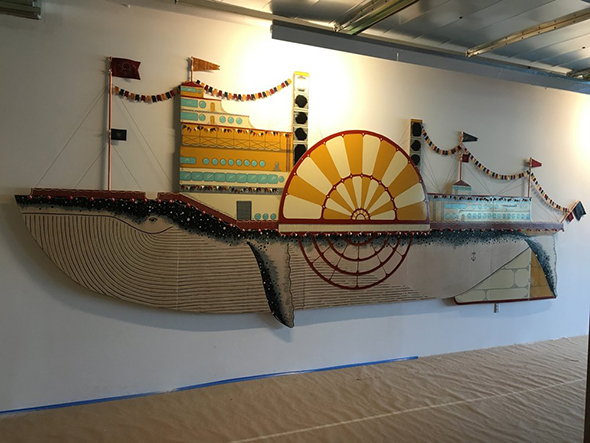 and a reticulated octopus sculpture accompanied by an under water mural for the entrance to a health food store.The mock up: 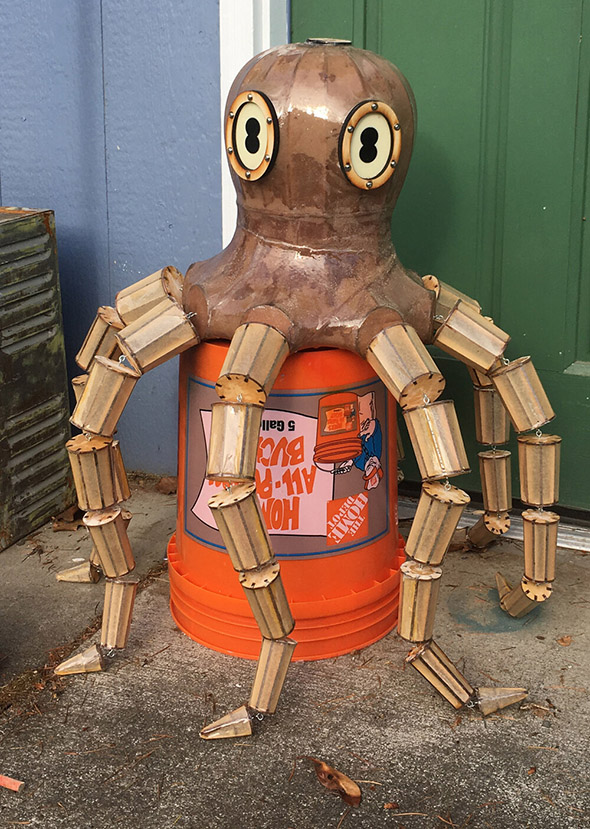 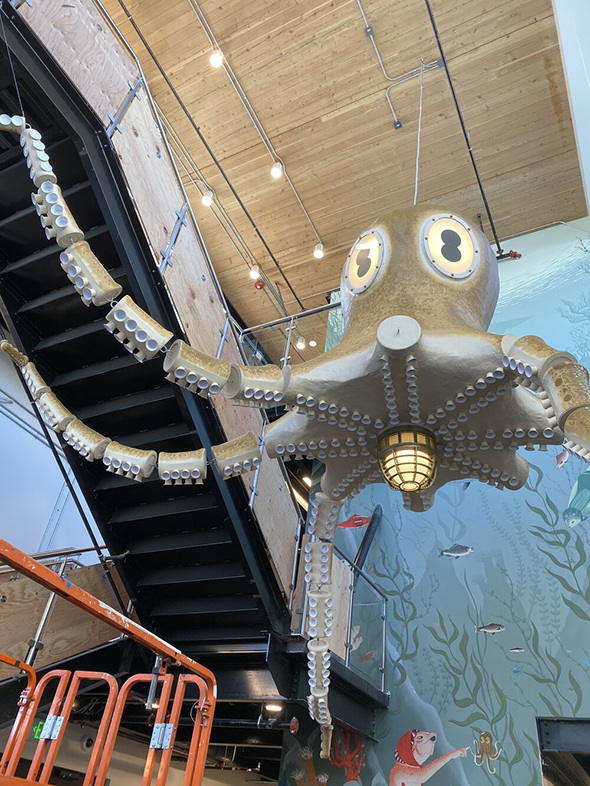 He has made a series of various amusing lamps, 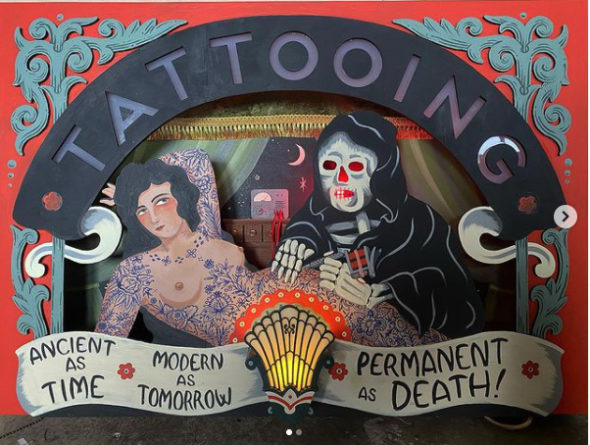 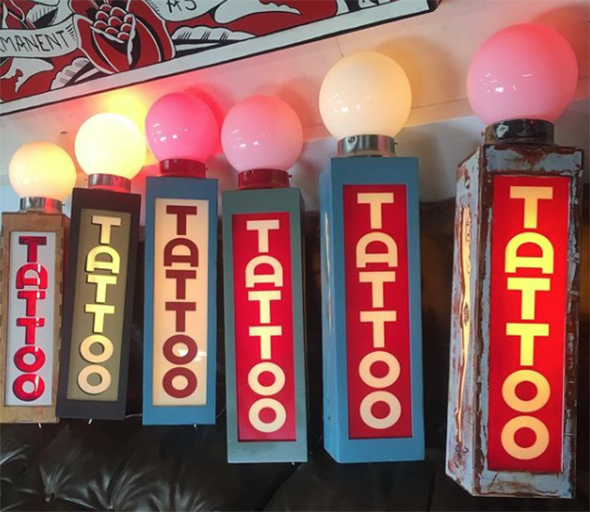 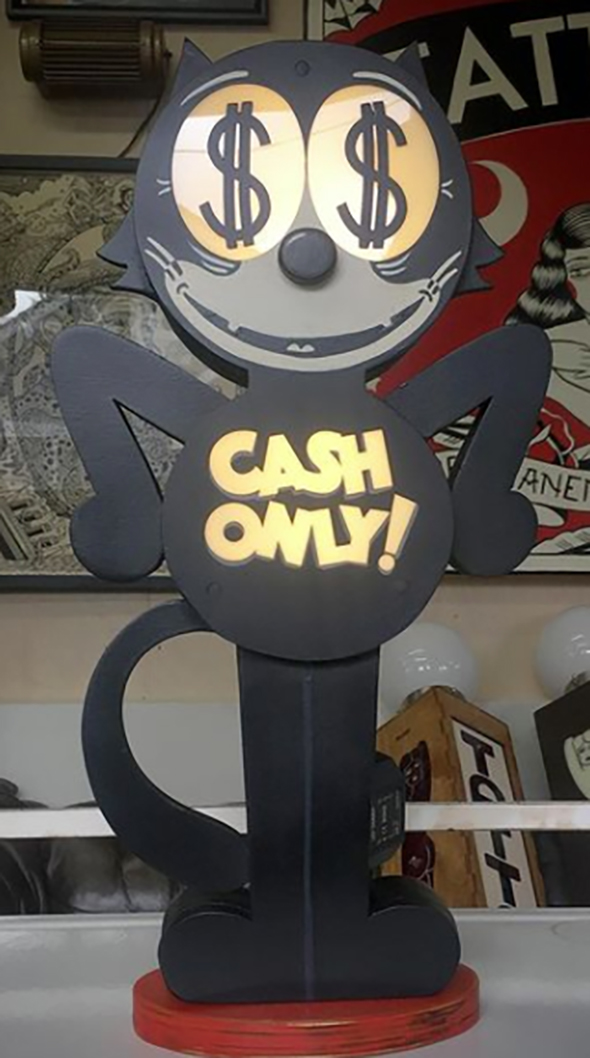 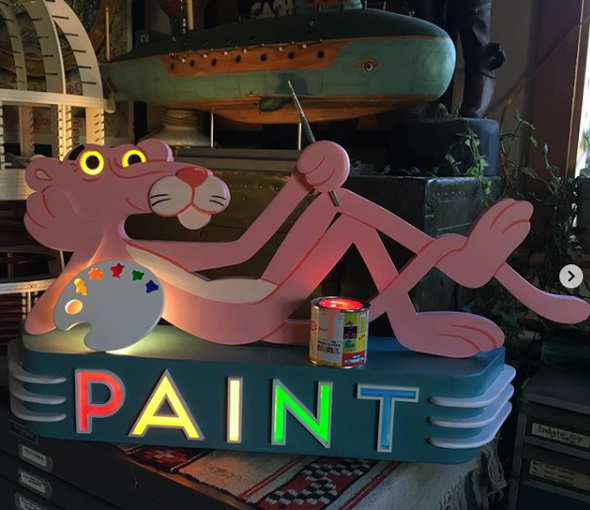 and cut out lady divers. He often makes these lady divers with fish heads, like the opposite of a mermaid in either tattoos or cutout wooden plaques. 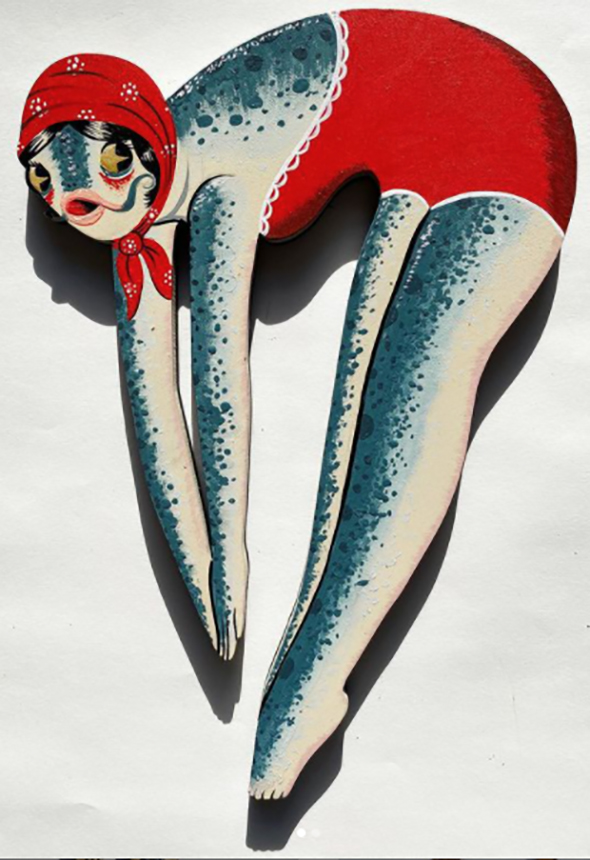 He explores simple mechanics with nostalgia, like a kinetic sculpture with three bicycling ladies powering a Riverboat/Trout hybrid. 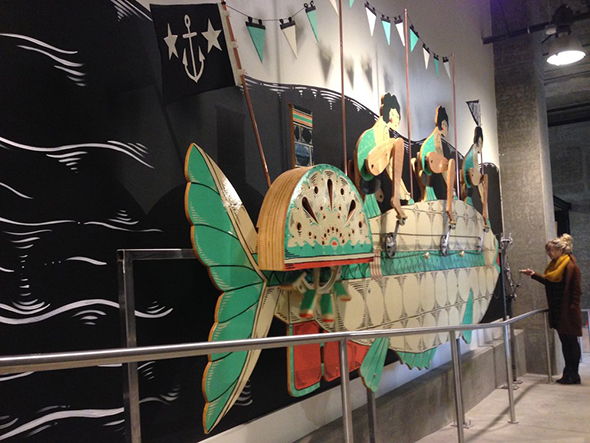 Let me describe one of Martz’s illustrations. An octopus tattoo artist busy with all 8 of his tentacles, tattooing two sailors, two women and a mermaid who is lounging like an odalisque, wiping his head with a handkerchief, and the last tentacle wrapped around the ankle of one of the women (perhaps his favorite?) There is a bottle of alcohol near him, with three x’s. Under an archway, behind him is a wall of old school tattoo designs. The tattoos in progress include a chest piece on a catfish sailor, mermaid on arm of other fisherman sailor, skull on the thigh of one of the ladies. 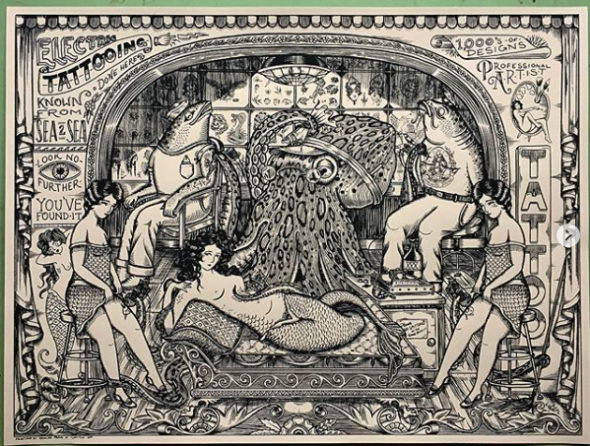 Kuhn is a tattoo artist exploring his internal landscape and probing childhood trauma. At the same time expressing our collective traumatic history, America in decay, abandonment, and our absent father issues. 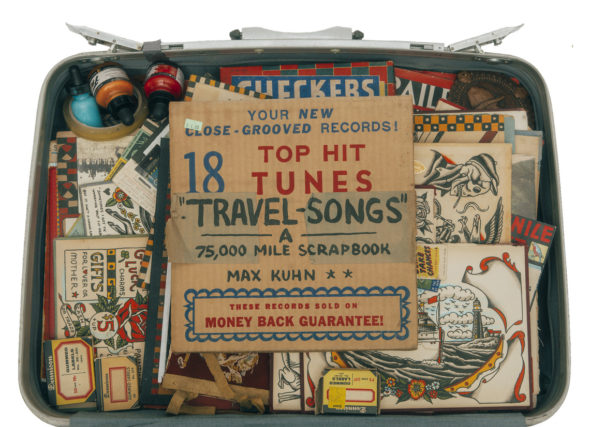 There’s something about Kuhn’s work that reminds me of old fashioned songs about tent revival meetings (where traveling preachers would evangelize a local population). Drifters, trains, and beatniks populate his mixed media objects and paintings. One of his installations included a sound collage. Real phone calls with his family, clearly evoking the distance between people, while giving his father a chance to explain the reasons for his frequent departures. 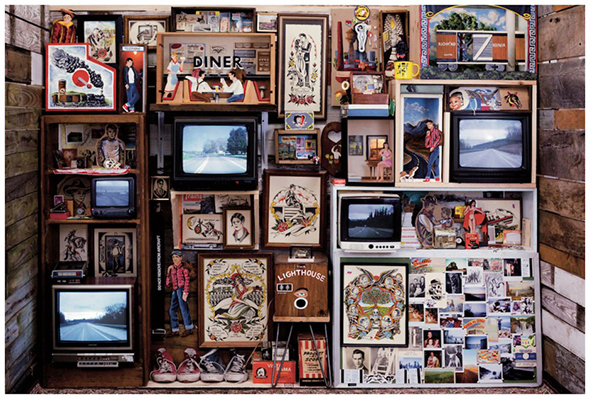 In his work there are often signs for cheap hotels, drug stores, truck stop restaurants and diners. Tattooers in the past hand painted signs as a side gig. Showing words also make references to the writing of Jack Kerouac, the father of the Beats. 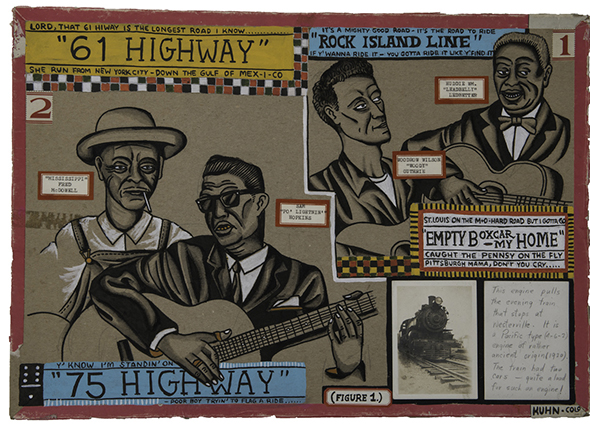 His paintings and installations express fear of intimacy. By jealously guarding one’s personal freedom, we can evade the responsibility of intimate relationships, and avoid being hurt. But we end up repeating the same mistakes of our parents. It’s hard to resist the elusive and romantic ideas of freedom; of being on the road, never fixed to one spot. The transient lifestyle of the hobo, hearkens back to another era of trains and the depression era.

His work also reminds me of carnival machines found in  « Musées mécaniques ». Beautifully nostalgic for the era of the traveling circus. The sweetness of folk art keepsakes, naive style wood carving, and objects.

Kuhn recently did an artist residency in Texas, in a beautiful old school house. A short film was made about this experience.

100W Residency from Maxkuhn on Vimeo.

Shrewsbury has abandoned tattooing for the time being to give more room to pure exploration. Lately, he has been making a lot of ceramics (always decorated with tattoo motifs), 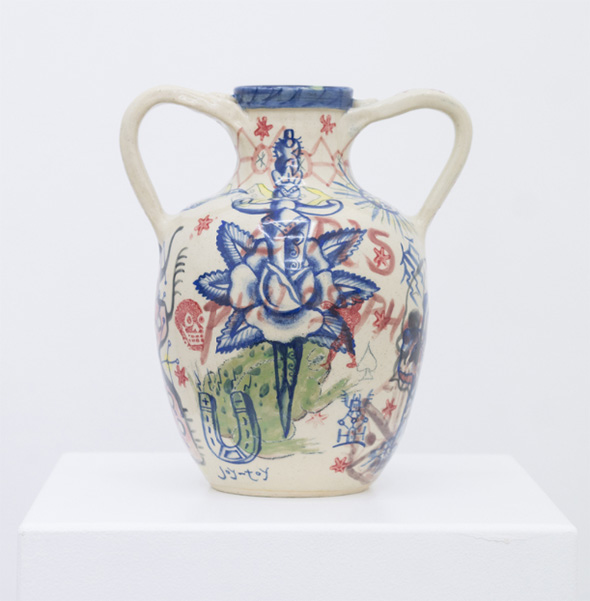 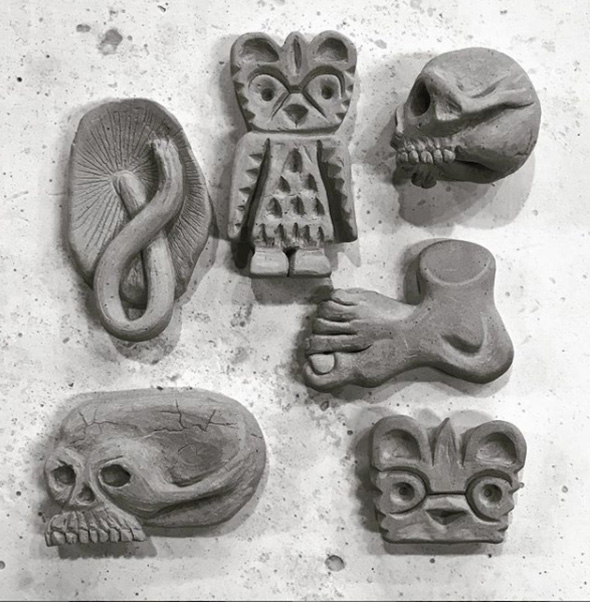 he has also been playing around with abstract designs, based on tattoo semantics and inkblot experiments. 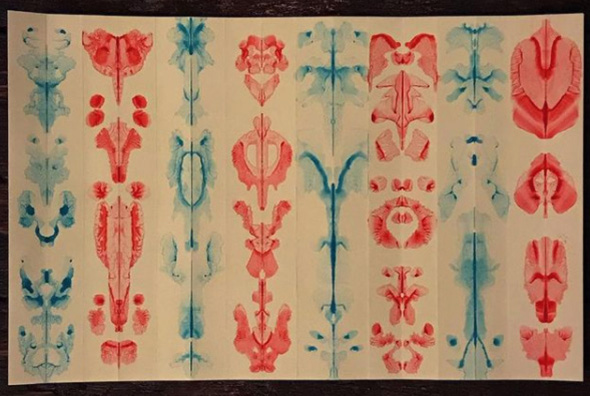 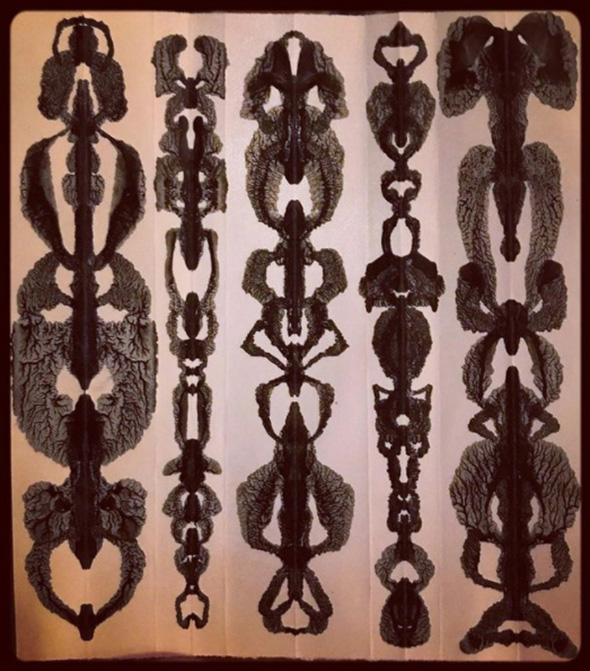 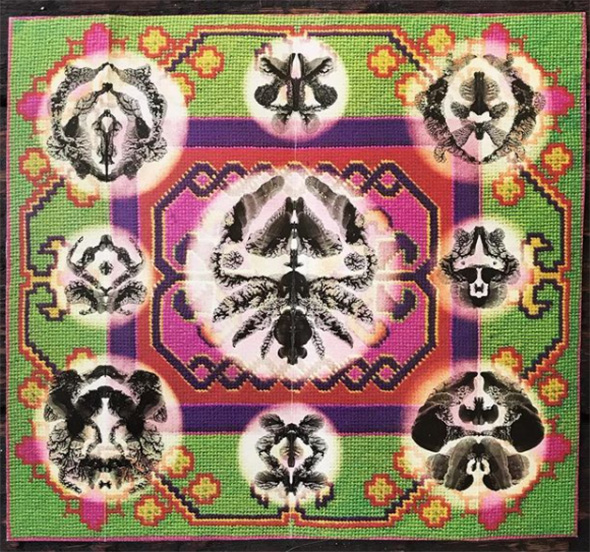 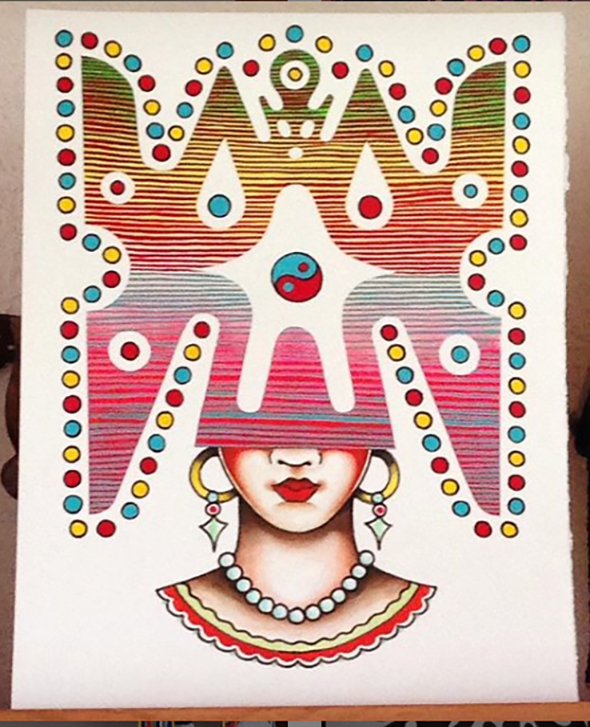 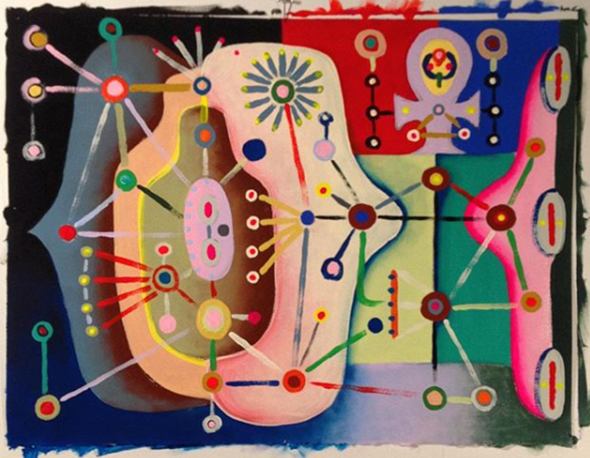 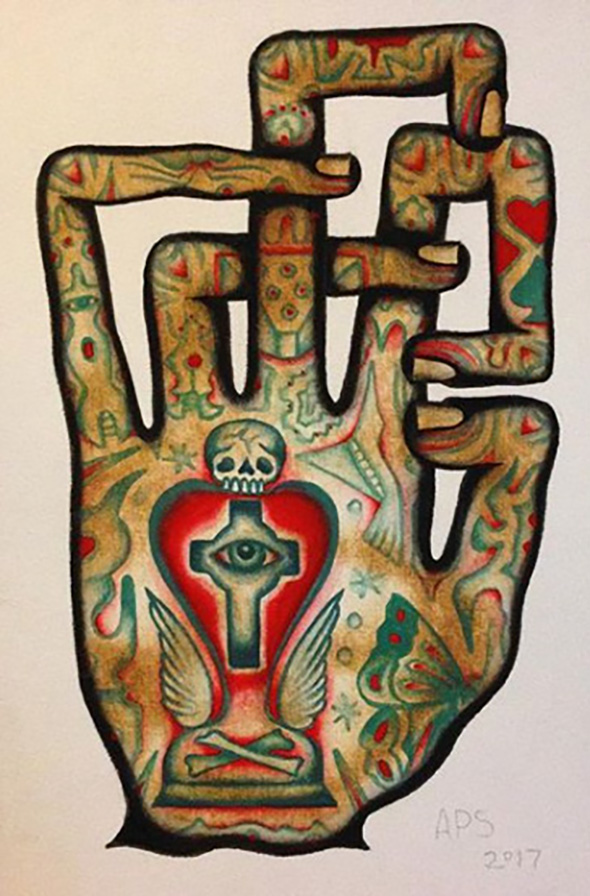 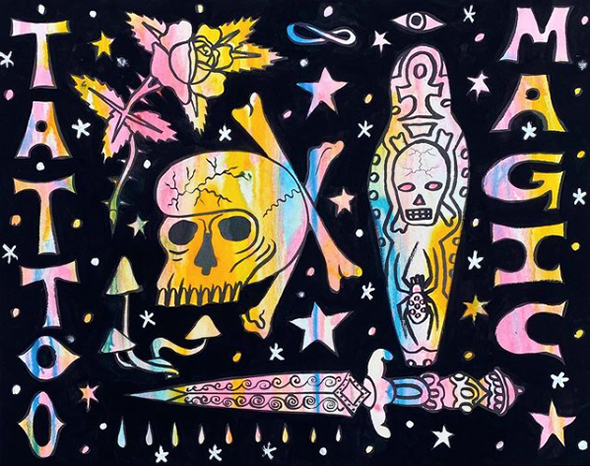 Shrewsbury was kind enough to explain his creative process to me…

« Well I am endlessly curious, so I do my best to follow (and try) whatever is exciting to me. I am still working to tune into my own voice, my true inner being, my intuition. I’m interested in being present for the birth of something totally new and exciting. To me true creativity must have some element unknown, some chance at failure, and this possibility of failure is also the crack through which something new and spontaneous can arise. Creative failures are the stepping stones to innovation, the creative process involves growth, risk, excitement and failure. »

I admire these artists for how they include tattoo language into a myriad of other mediums. I admire their courage to explore and experiment.

We tattoo artists are often a victim of our own successes. We don’t have time to explore new ideas and other mediums. We are too busy drawing for the next client and dealing with all the tasks and headaches of running our businesses.

Yet to remain fresh, inspired and nourished we must take the time to think of our own ideas and expression. When we do, we can bring lots of fresh motivation back into tattooing. How can we ever know how far we can go as artists unless we push ourselves? Otherwise, we endlessly repeat our past successes, take no risks, and there is no evolution.

You must realize that when we will die and our clients will die, there will be nothing left behind. It all disappears. The disappearance of flesh is faster than expressions got down on paper, canvas or other supports. Those things will disappear as well, of course, but a very long time afterwards.

The art of tattoo artists is not yet appreciated. With one exception: ceramics. Ceramic work in general is really taking off in the art world. The functional and timeless beauty of pottery always seduces collectors. Our art isn’t recognized or widely collected, however, it is certain that we are living a renaissance right now, that future generations are sure to find interesting. Or not. It is for destiny to decide.