Yesterday we went to Vinyl Office a new record store in Bastille. It was an art opening, a friend of ours Patrice Caillet, collects modified album art. You know, when people change the record album with doodles, collage or other ways of defacing the original. Some of it was fan adoration and others complete disrespect! I think sometimes people made new covers because the first was damaged. There were children’s scribbles and druggie doodles. Amongst the record store inventory, I found a french edition box set of Gene Vincent that I have been searching for since an old roommate stole my copy (very exciting since it was very reasonably priced!). I also found a cool Screamin’ Jay Hawkins disc, “Real Life”. Afterward we went to see authentic jazz in a St-Germain-des-Prés cave. Why did I wait so long!!!??? It was like a time warp, everything beatnik and cool that I imagine Paris was in the 1950’s . Serge Gainsbourg covers by some talented american musicians, check it out. They are playing again here on monday night.

Here’s an image from “Lili” a great french teenage comic strip that I adore. I love this image because it shows what a concert in a cave looks like. Check the bored beatniks! I will show you more about Lili later. 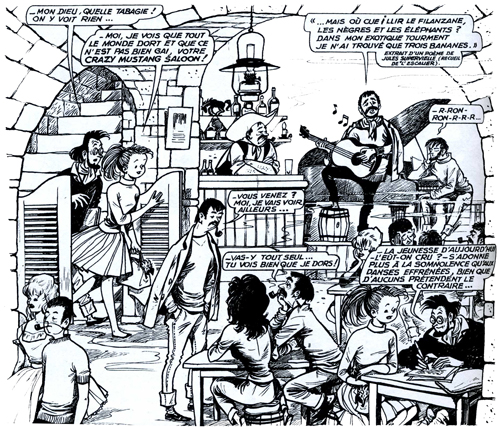