I would get a tattoo of my cat, Beep, on the outside of my upper right arm. Why a tattoo of my cat? Because he’s been a constant companion for the last 11 years. He greets me when I come home and sleeps with me each night. Whenever I’m sick or had a bad day he’s right beside me purring away trying to make it better. The ex-roommate’s boyfriend that I hated, he clawed the guy. If I were a witch he’d be my familiar.

Since he’s been a lucky guy, Beep’s survived a rattlesnake bite and weeks missing in the heat of Texas’s summer, I’d want a picture of his face surrounded by a horseshoe. I can picture him wearing a bandanna or bow tie with a little dead rabbit head in the center (he once caught and ate a rabbit while on a cat lead). There would be flowers, since when he gets outside the first thing he does is stop to smell the flowers. Or something like that.

I know it sounds a bit crazy, but I can’t think of a better way to commemorate my furry munchkin than to get a tattoo of him so that when he’s gone one day I can look down and remember his goofy face. 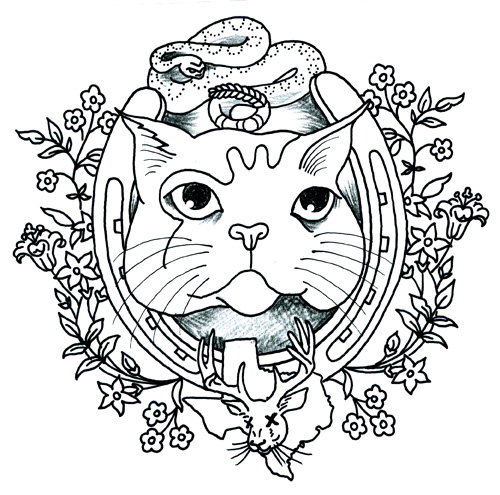