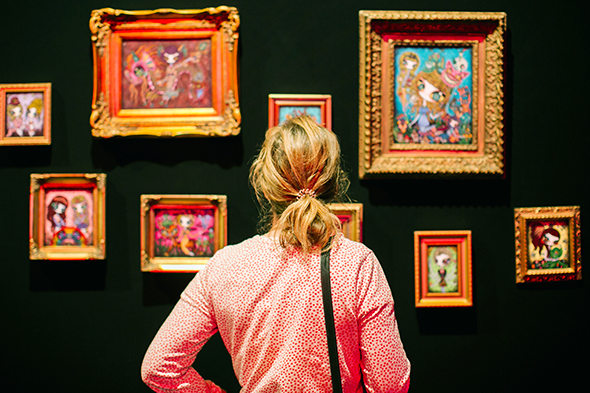 The title of our event this year was “Patriarchy is burning”. In addition the theme for Gang of Witches 2019 is Mars, the red planet, the sister planet to Earth. Furthermore, Mars is also the god of war. To that effect, we are deadly serious about disrupting the patriarchy. In short, taking back our power, we are engaged politically and environmentally, fighting for feminism, ecology, and intersectionality. We are mobilized, this is our combat.

Undoubtedly, this year was a bit different. Specifically, this year’s event was even more performance than before. The first year we had Sophie giving a baroque concert and House of Drama doing a dance performance piece, the second year Gang of Witches performed one song and Julie Atlas Ruiz made a performance especially for us about Venus. This time our paintings, photos and sculptures were presented to decorate the entrance and mezzanine of a theater. Instead of an art show with performances, it was a performance art festival with a small art show to decorate the venue.

For example we had:

Paris is Burning- a dance performance based on the 1991 film by Jennie Livingston. Namely about African American dance contests called waacking. Presented by House of Drama.

Julie Atlas Ruiz- did a performance/dance with giant penis puppet, then a soft core sex show celebrating handicap sexuality, which was dedicated to sex workers everywhere which were referred to as “soldiers”.

Rebecca Chaillon- created a performance about hunger and eating

Gang of Witches- put on an explosive concert, the girls destroyed the audience

Sophie Rokh- read from her novel, she systematically laid out the perversity of the patriarchy in her dystopian novel excerpt

Sabrine Kasbaoui- presented a documentary and debate about every woman’s horror story of how she was (mis)treated by Gynecologists. (I have 3 or 4 horror stories myself) Strategy: get the troops angry!

Mon enfant mon bataille (my child, my battle) by Emilie Jouvet- a documentary film about lesbian/gay parenthood and the lack of rights that gay parents have. Such as in France the non biological parent must adopt the child; just one of many humiliations and challenges gay parents must face. In contrast, there was beautiful footage of the day gay marriage was passed in the senate. The winning voters triumphantly chanting «equality» while the losers filed grumpily out of the room. Absolutely, in this particular case one fight down many to go!

Arôm, installation- As every year in the past we had a huge Floral Installation. Conversely, this one was meant to evoke the bonfire pile of wood where witches were burned at the stake. Our intention was to put patriarchy up in flame

A podcast was recorded live by La Poudre

This year I presented a large painting, and you can read about it here. In my painting I presented my ideas on how to combat patriarchy. And I also did a performance you can watch here. In fact, my performance was an extension of my painting. Altogether a protest, I tried to get the audience to engage with me and rise up.

Definitely, turn out was great this year, we have enlisted a battalion of new recruits!

People’s reactions: Without a doubt, people I talked to had a lot of respect for the work we did this year, they were thoroughly impressed. I’m proud of all the hard work by Gang of Witches.

Finally, I want to thank above all my witches, also Pierre Laporte, Tiphaine Dupeyra, Jean-Phillipe Humbert, all the performers, all my friend who came out, as well as Sixtine, Florence, Mattias, Samuel, and Laura