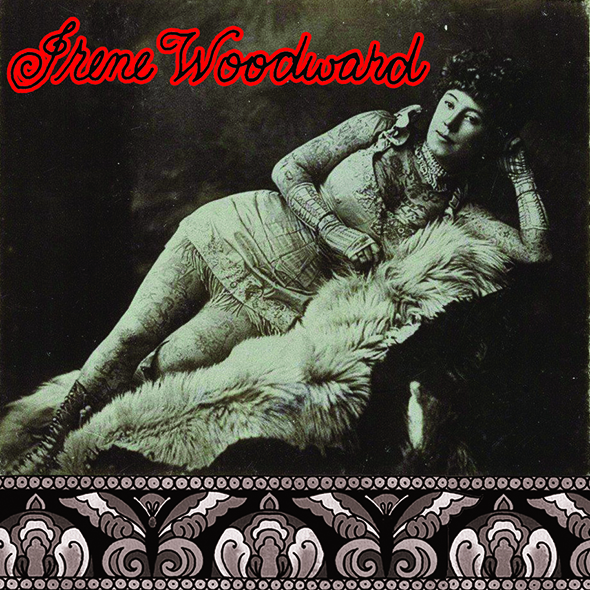 Irene Woodward was the stage name of Ida Levina Lisk born on August 24, 1857 to a working class family (her father was a shoemaker) There is some discrepancy as to who was the first tattooed lady, Irene Woodward or Nora Hildebrandt. In any case they both started to exhibit themselves the same year 1882. Some say Martin Hildebrandt did her tattoos (which I think is erroneous, how could he have tattooed the two women at the same time? Especially since he was in a relationship with Nora), other researchers have said that the La Belle Irene’s tattooing was done by Samuel O’Reilly and Charlie Wagner of New York City. Martin Hildebrandt’s studio was not far. Was there a race between these tattoo artists to produce the first tattooed lady ? One hint at the rivalry between the two women and maybe the reason for the nickname « La Belle », the pressure of Victorian beauty standards (the press said Nora’s face was ‘hard’, they also criticized her for her weight gain).

Irene had a similar mythical stage biography to Nora’s. She was also supposedly tattooed by her father, except that her tattoos were made to “protect her” from the Indians. (This is another vaguely veiled fable with the theme of incest and escape from « savages » through clever methods, playing into the fears and hopes of the era). There is one story told that Woodward was actually desperate for money and happened to ask for work at a circus museum. The manager, a Mr Starr suggested her becoming the first tattooed woman, and paid her a stipend for a year as she got the work done. This could be true, the New York Clipper newspaper mentioned her working with G.B. Biennell, (a dime museum operator).
Irene was extremely famous in her day. She was immortalized in 35 wax museums and in lithograph posters (I wish I had one!) and photos. She went on an European tour in 1889 With P.T. Barnum and in 1904 went to Russia and was presented to royalty.

I surmise that Irene got married after she started to get famous. She married George E. Sterling who was her agent. In order to preserve her rising star he took her name and became George Woodward. They sometimes told press they were sister and brother. Maybe another reason why Irene’s success eclipsed that of Nora’s, she married and was followed by her agent, while Nora was with her tattooer, who later was interred and died in a mental institution.

Here’s a wonderful description of some of her tattoo collection.
«About the neck is a garland of flowers about which hover butterflies. Upon each shoulder is a representation of the setting sun, and innumerable stars are worked on different parts of the skin. A beehive is worked upon the left arm, around which is fluttering a swarm of bees. Over the hive is « Never Despair » and « Nothing without Labour » is under it. The right arm bears an American eagle with the inscription, « I live and die for those I love ». A harp enclosed in shamrocks, hands in the grasp of friendship, wreaths of flowers and curious devices are also worked upon the arm. On different parts of the body are figures representing Faith, Hope and Charity, a sailor leaving home, Atlas, birds, rabbits, the Goddess of Hope, angels, swans pursued by a swimming boy, a wheat field, two ships in action, the sailor’s return, an Indian’s head and numerous others» New Zealand Herald Auckland May 20, 1882 New York Truth

She died of cancer of the stomach or uterine cancer (there are conflicting reports). One newspaper claimed that “the poison of the tattoo marks she had worn all over her body” was the cause of her illness. I doubt that this is true. It is just another of many examples of society’s disapproval of tattoos, but also women having control over their bodies and their lives. Mixed with a bit of sensationalism used to sell the story. Things we still are dealing with today 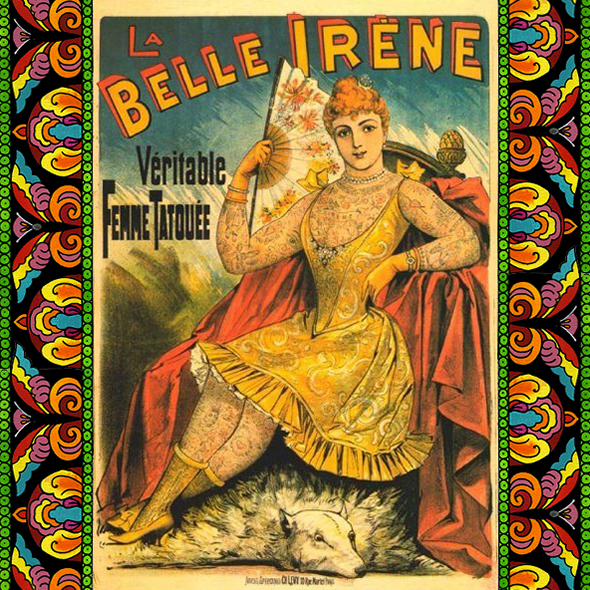 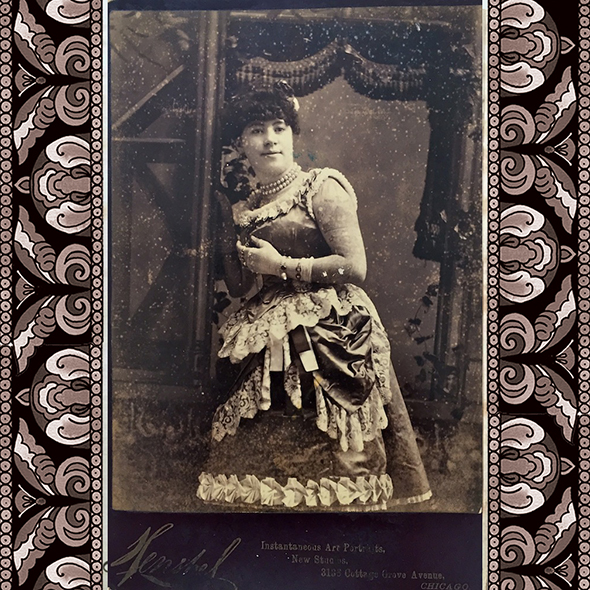 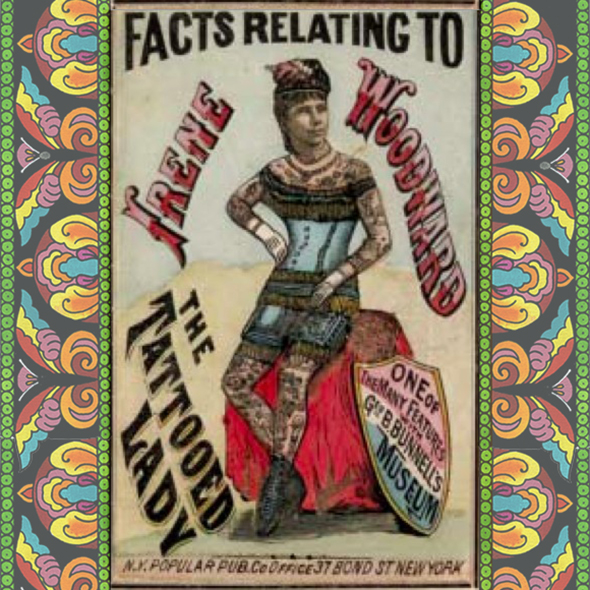 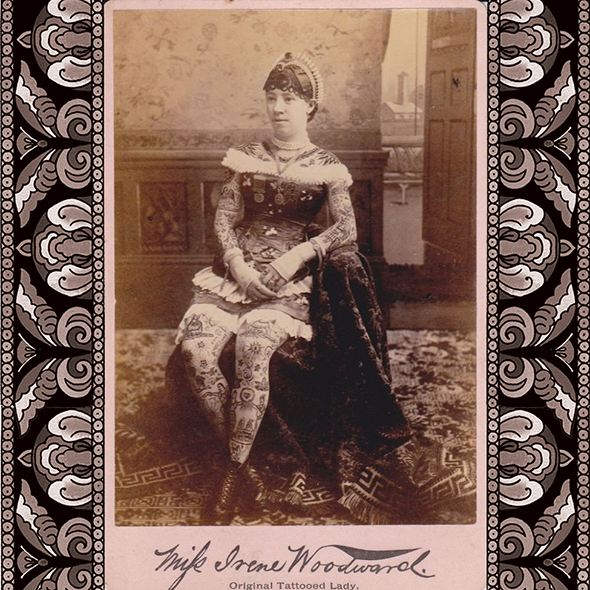 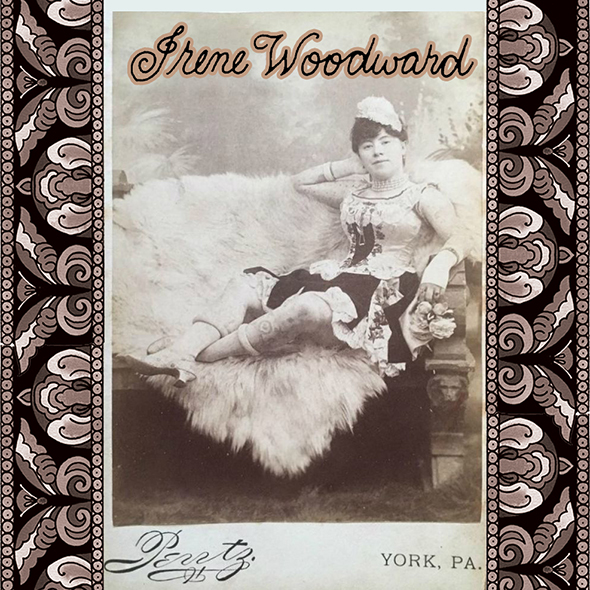