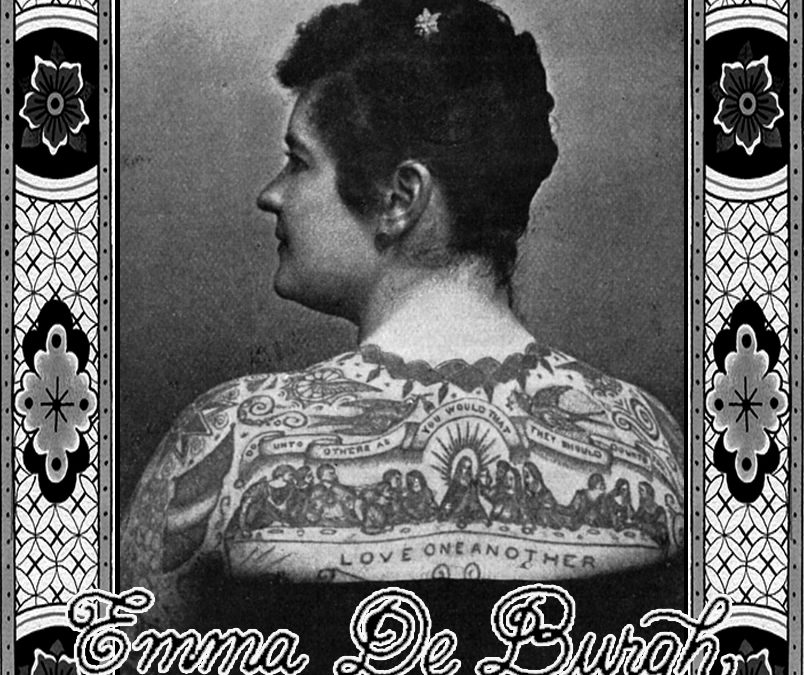 Emma De Burgh was one half of the first tattooed couple attraction, Emma and Frank De Burgh. She was entirely hand tattooed by Samuel O’Reilly the inventor of the tattoo machine. It’s reasonable to assume that during the 18 months that it took him to tattoo Emma that Samuel decided «there must be a faster way to do this». Emma and Frank seem to be the only tattooed attraction at the time that didn’t fabricate a story. The true story of their romance was enough to make people understand the why of their objective to get tattooed. They had a public wedding July 1885, in what seems to be the launching of their career. 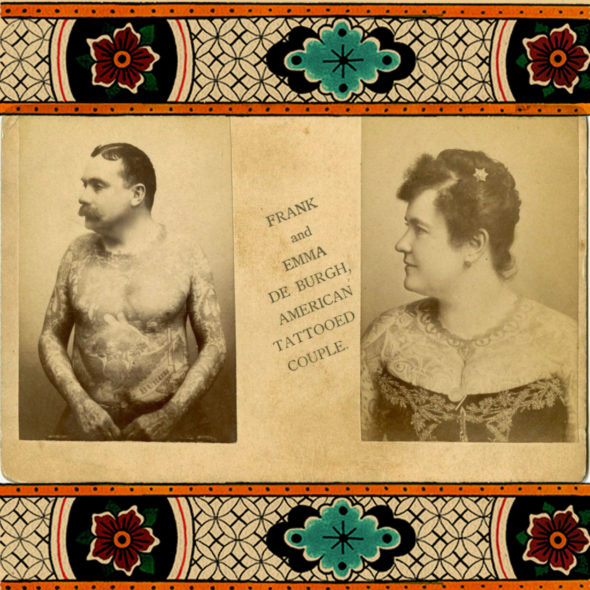 Valentine’s day was just starting to become commercialized in the mid to late 1800’s. Tattooers of that period were hugely influenced by popular current illustration. They used it as reference or straight up copied: lithographed valentine postcards, prayer cards, ornate cards with images of the saints, items that were inexpensive, mass produced and prevalent everywhere. Emma and Frank may be responsible for the introduction to the general public of the ever popular heart and banner tattoo. Fitting the story of their love anchored by tattoos, they both had each other’s names tattooed prominently, as well as many hearts, flowers and cupids. 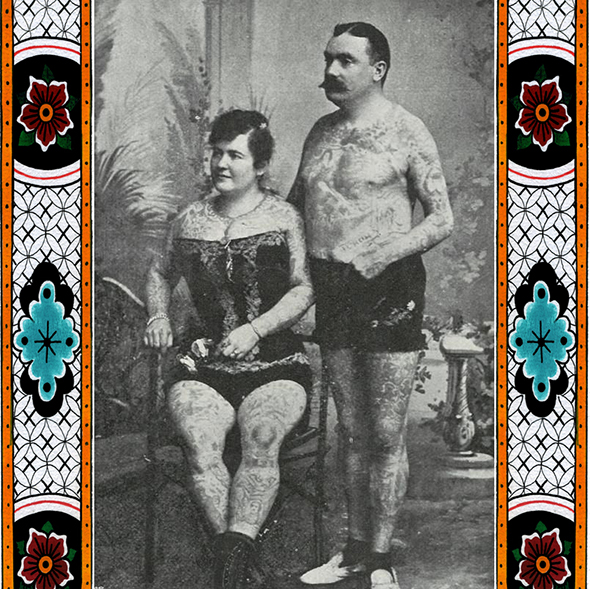 Love of Country, Love of God.

Emma and Franck were also covered by many patriotic motifs, but mostly they wore religious tattoos. Emma was celebrated for having tattooed across her upper back, da Vinci’s last supper. Emma may well have been very religious or it could be Victorian fashion of the era. They may have been thinking about what would be popular subjects with their audiences. Religious tattoos being a subject that would be accepted and just slightly shocking, limiting public outcry. Just the fact that Emma was exhibited next to her husband made their act a bit more wholesome than the stand alone, scantly clad, tattooed lady.

Christian tattoo designs have taken several complicated turns throughout history. Most everyone has heard of Leviticus 19:28 which is interpreted as forbidding tattoos. The interdiction in the bible was a way to make hygienic suggestions but also remove an important identifying pagan ritual. Before Christianity, most of the Europe practiced a pagan religion, rituals and celebrations were removed or converted, to make way for the new religion. The Romans assumed correctly that Christians believed that marks on the body were a source of shame. So they forcibly tattooed Christian slaves to prevent their running away. It is written in the bible that Babylon had tattooed on her forehead «mother of harlots and of earth’s abominations». However, as an act of rebellion against their oppressors Christian tattoos soon became an outward symbol of devotion. It is mentioned in Galatians 6:17 «From now on let no one trouble me, for I bear in my body the marks of the Lord Jesus». At different periods in history tattooed crosses were believed to: ward off the plague, to ensure one of being buried in a Christian cemetery, or as a souvenir of a pilgrimage to Jerusalem. 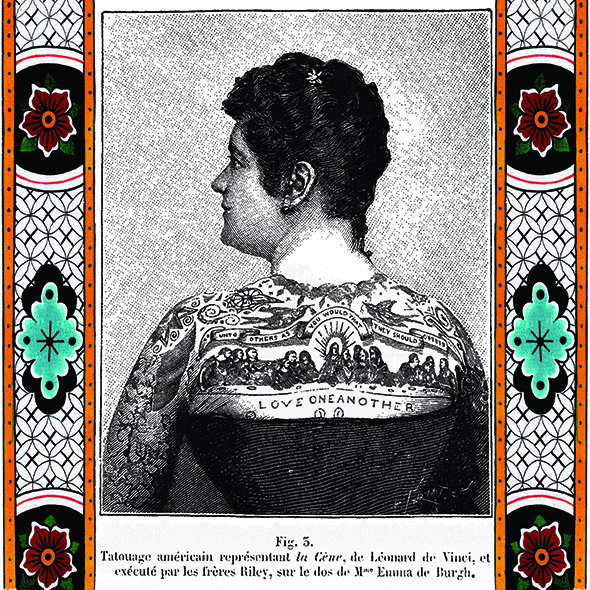 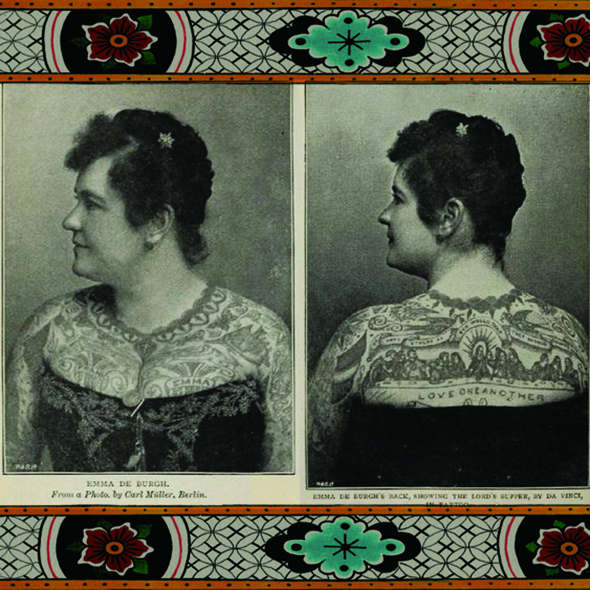 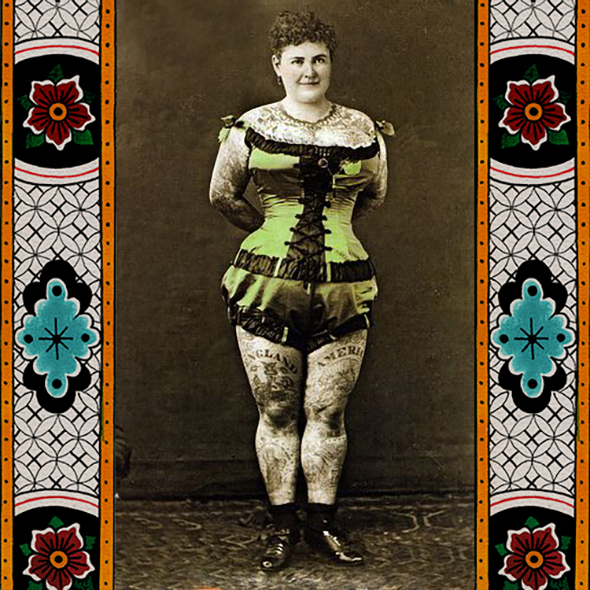 Emma and Franck were first exhibited in Berlin, circa 1891. They became very famous in Europe and toured for many years. 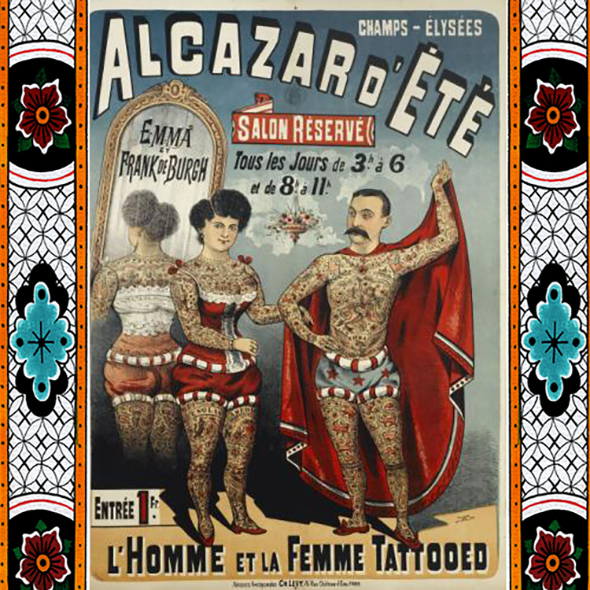 Body Image and the Pressure of Public Exhibition

Maybe exposing herself publicly night after night and being subjected to the public’s often cruel remarks about her body or just because they were living the good life and eating well, Emma started to put on weight. Today’s theories about body image or the idea of women reclaiming ownership of her body, make it tempting to make conjecture, we’ll never know for sure. We do know that she was judged and ridiculed by her public. After her weight gain Sir Walter Burnes-Jones (artist) famously wrote to (fellow artist) Whistler that she gained so much weight that «the apostles now had wide grins across their faces». 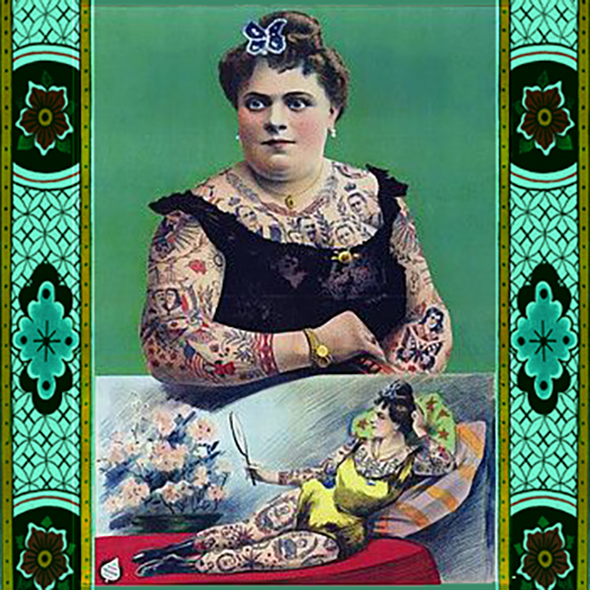 Emma might have cared less, she felt confident enough to be photographed naked. You must check out the nude photo of Emma in The Tattooed Lady by Amelia Klem Osterud (2014). Taylor Trade Publishing. If you are interested in the history of tattooed women, this book is essential.